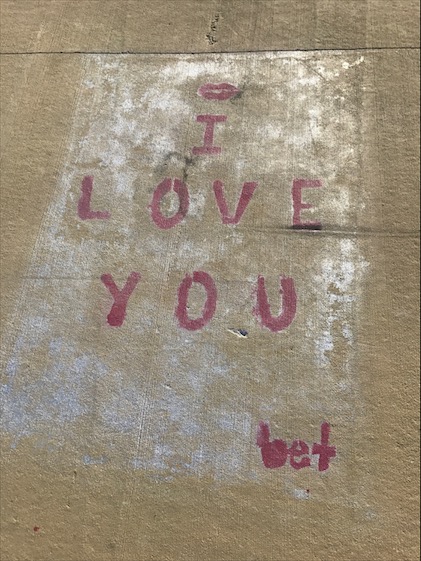 Location: Helicopter Pad in the Santa Monica Mountains in Tarzana 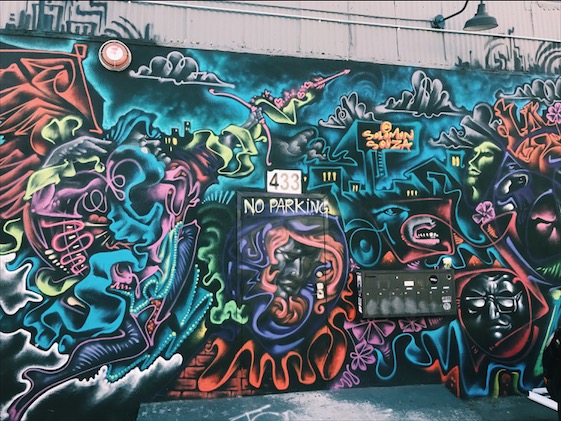 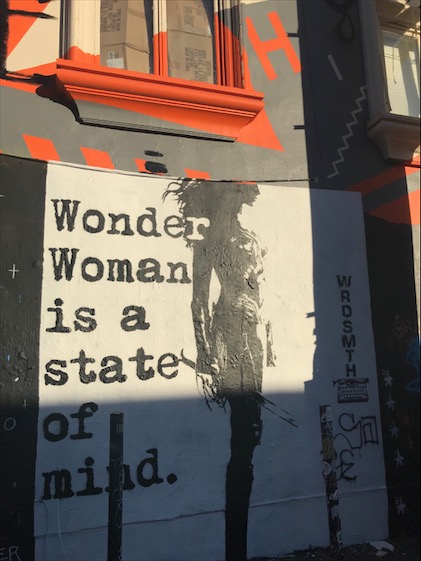 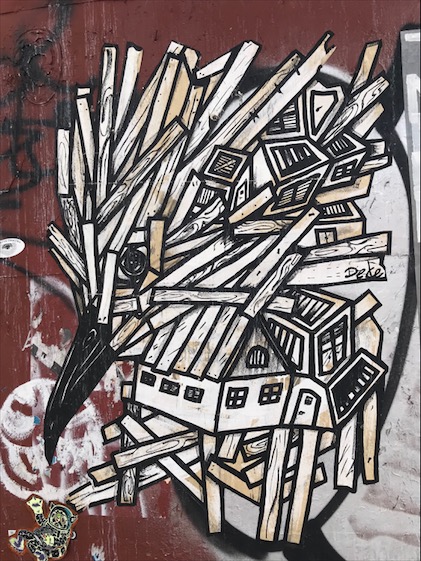 Background: Lila is my best friend from high school. She has a tradition with her dad, Jon, and her younger sister, Sydney, to hand make apple pies for Thanksgiving together. They have been inviting me to be part of this tradition for the past 3 years.

Context: I called Lila over FaceTime because she attends Drexel University in Philadelphia. I recorded our conversation and transcribed it below.

“Honestly I don’t know when this tradition started but for as long as I can remember when it’s Thanksgiving time we always go to my cousin’s house in Orange County. Everyone in my family brings something because there are so many people, like first and second cousins. Me and my dad and my sister have a tradition every year to make the apple pies. My dad makes sure that a day or two before Thanksgiving me and my sister are home for the night to make apple pies with him. When we got older it became a thing to invite friends. It’s fun and one of those cute little traditions your family has. I don’t know how it started but yeah. My dad found some recipe online or something but we make the dough fresh every year. We start by skinning the apples… or wait we make the dough first and put it in the fridge. Then we do the whole apples and cinnamon for the filling. Then we make the top crust. For the past year or two we’ve started to make a berry pie too. We’ll make a few apple pies and then a berry pie too. My parents have started to buy extra ingredients so that our friends can take pies home with them to take to their Thanksgiving dinners.” 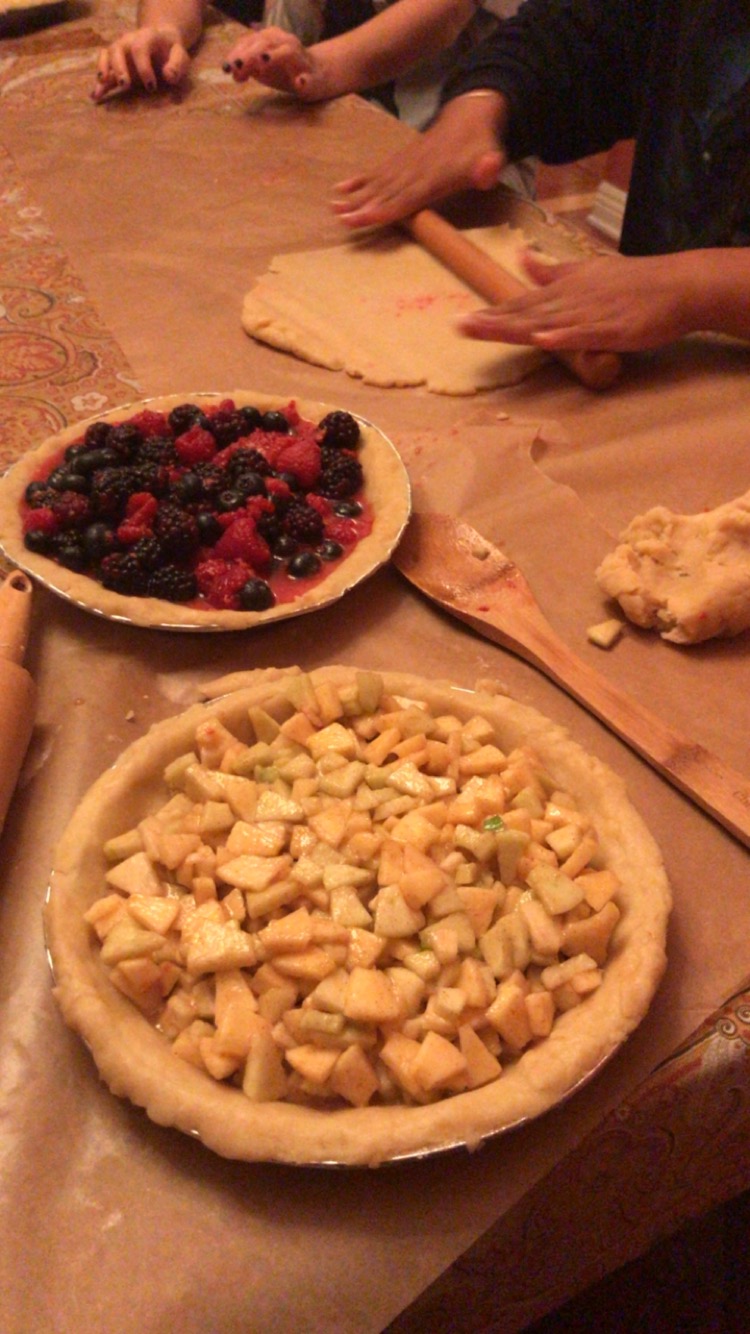 Apple and berry pie at the Hanish household, Thanksgiving 2017.

Background: I had approached Hannah about telling me about her family Passover tradition that she had fleetingly mentioned at Shabbat Dinner at Hillel at the University of Southern California. She had talked about a hazelnut game for children during Passover that is unique to her family. Hannah goes to her grandparent’s house for the first night of Passover and celebrates the second night at her great-aunt’s house. She is from Illinois.

Context: I interviewed Hannah in the dining room of our sorority house, Delta Delta Delta. It was right after dinner so the dining room was full of people with coffee or tea chatting in the background of our conversation. After Hannah shared her family tradition of the hazelnut game (published under the title “The Cremer Family’s Passover Hazelnut Game”) I asked her if her family has any other family traditions for Passover. She then shared the tradition of individual afikomen.

“We all have our own afikomen. I don’t know when it… as long as I can remember there is always an afikomen for everyone to find. So like all the grandchildren have their own. Currently there are 9 different afikomen hidden with our names on them. They’re wrapped and we always get a $2 bill. That’s our gift for finding the afikomen. It’s wrapped in a napkin that has your name on it. My grandpa gives us $2 bills as the prize. I’m not sure who started this tradition. I doubt that it comes from my great grandfather. My grandparents hide the afikomen for us to find before we all come to dinner. If you find someone else’s you’re expected to put it back where you found it or pretend like you didn’t see it.”

Background:  I had approached Hannah about telling me about her family Passover tradition that she had fleetingly mentioned at Shabbat Dinner at Hillel at the University of Southern California. She had talked about a hazelnut game for children during Passover that is unique to her family. Hannah goes to her grandparent’s house for the first night of Passover and celebrates the second night at her great-aunts house. She is from Illinois.

“Basically it’s kind of like marbles but we play with hazelnuts and my great-grandfather came up with it. We play with shelled hazelnuts. Everyone sits in a circle and you have your own little pile of hazelnuts which are like the ammo and in the center they spread them out, like a dozen or whatever, and then the kids all go around and take a turn throwing one of their hazelnuts from their personal pile at the ones in the center. If you hit one in the center then you get a quarter. Then as the game progresses there are stacks of quarters with a hazelnut on top that are in the center which are the jackpot pieces. When you hit the hazelnut off the stack of quarters, then you get the hazelnut plus the whole stack. So it’s pretty fun, I don’t know. You play it until you’re at bar or bat mitzvah age and then my grandpa is always the one that runs it all. His grandfather was the one that came up with the game. So we’ve been playing it for a really long time with the exact same hazelnuts. I don’t know how they’ve lasted this long, they’re 60 years old. It’s so gross. I was the only granddaughter until I was 12 so I always got some extra quarters tossed my way. It was always a fun game. When you’re a little kid, the Passover seder is so long to sit through. We would play the game right before dessert. So after the seder and dinner- it was something to look forward to. We always played on the basement floor of my grandparents house. It’s really bizarre. My great grandparents were born in Odessa, Russia. My grandparents were born here. My grandpa learned it from his father. I think it’s important to my grandpa that we keep playing this game. All the hazelnuts are the original hazelnuts, we don’t replace them with any new ones. My dad’s whole side of the family is Eastern-European and came to the US around the early 1900s. I didn’t know that other people didn’t play this game until I was pretty old. I truly had no idea, I thought everyone played this.”

Reflection: I am Jewish and grew up in Los Angeles going to Jewish day school. I have never heard of a tradition like this one, from my friends or family.

Context: Prior to describing “glow in the dark nunchucks”, Professor Nye had been sharing his memory of one raver who was infamous for bringing neon and glow in the dark lassos to events.

“Really popular, at least in the Bay Area, because there was such a strong presence in the Asian American community- right by the glow-in-the-dark lassos you could see glow-in-the-dark nunchucks. The nunchucks were pretty great. Standard colors would be green or orange or blue were the most popular, yeah. Nunchucks, yeah.”

We were then joking how much festival security and concert security would quickly confiscate anything that could be construed as a weapon nowadays. These glow in the dark nunchucks have thus become a relic of past raves.

Context: Professor Nye was at this point in the conversation reflecting on the colorful culture of raves, and the neon colors he associates with his memories of it.

“I’ll also introduce one figure from the mid to late 90s that I would be fascinated to know what happened to him. You’d see him at all these events. He was this amazing guy, I think he was – whether it was his regular job I don’t know- I think he was kind of a traveler who was a former cowboy or was a cowboy. And he would get dressed up and actually had, in the middle of these parties, a glow-stick lasso. And he’d be like lasso-ing with this glow in the dark lasso, or even multiple lassos, and that was pretty incredible. He was affiliated with this Bay Area trance scene that I was primarily involved in. Around ‘98, ‘99, 2000.”

Aside from the illustrious raver cowboy figure, there is an element of rave dance from the late 90s being shared here. The use of neon, glow in the dark lassos as part of the ritual of dancing in a crowd is an important aspect of the information being imparted here.

Context: Professor Nye was describing jokes and stereotypes of ravers that existed when he was involved in the underground trance scene in the Bay area. He was laughing throughout the joke-telling still clearly very amused by the jokes. Professor Nye seemed to expect that I would understand the jokes as a student in his Electronic Music and Dance Culture course based on our learning about rave culture.

“I remember just jokes around… actually this is hilarious I remember a list going around of “You Know You’re A Raver if” blah blah blah. Have you ever heard these before? At that time one of my favorite ones was, that I kind of came up with with friends was “You Know You’re A Raver if your email is happysparklyglowbear15@plur.org Another one is, you know you’re a raver if you’re doing the laundry and you start arguing about whether the washing machine has a style of tribal or trance. The strongest example was you know you’re a raver if you pay $30 for a party that may not happen, pay $20 for a pill that may be aspirin, but you will not pay $2 for a bottle of water.”