Informant learned about the Toifitag annual event by witnessing and participating in it while staying with a former Au Pair’s family in Rauris, Austria.

Collection context: Informant was in her room working on an arts and crafts project.

Note- Throughout the “recitation” the informant would talk with her hands and gesture. Italicized text was said with particularly more enthusiasm than other segments (although she still was enthusiastic while relating the entire event). Also, a Toifi is one of Santa’s devils (like Krampus) and was pronounced phonetically dweefe or doifi by the informant.

Informant (I): Sandy lives in Rauris which is this tiny little town in Salzburg above the Alps…you know that.

I: *Laughs* Great, well, anyways…it’s a National Park and they all have their own little forests, but the guys up there, they cut down these trees and I don’t know the name of those trees I’m really sorry, but there’s this tree up there and, it’s just a regular tree, and then once a year during a certain time of the month if the moon is full on like the third day around Christmas time, you can cut down the tree, and it won’t burn. And then they make chimneys out of it that they use for Doifi day (Toifitang) and the Doifi are like the devils of Santa Claus and they come *collector laughs* No! Have you seen…I have to show you the pictures They have these big furry colorful scary masks, they kidnap that children and hid them in sacs. I’m not kidding, like the kids are terrified of the Doifi. (Hand movements all through this) And then Santa comes to all the kid’s houses in this tiny town and like gives them there presents and everything. It’s really cool and Santa has like these angels, but all the like older guys in the town are like the Doifis and they hit kids with brooms…I got hit by a broom almost, it kind of hurt…actually I definitely did get hit and it definitely kinda hurt, but I was protecting Anna who was scared of them. But these trees on that day…

C: Wai-wai-wait a sec I don’t understand these tress

I: On this day, these trees, they have them out in the snow and everything cuz they make like chimneys out of them because you see the Doifis on the street and everyone’s out there, right? And so you make this like you hollow it out and then you burn wood inside of it, but for whatever reason cutting down the tree on this one day, the wood doesn’t burn…in theory it’s this one day that causes that and then like the…you have fire inside it and you don’t have to worry about your chimney burning down.  It’s like they hollow out the log the, the trunk of the tree.

C: So they, do they put it inside of the house?

C: So they cut down the trees and like put them outside their houses and then…

I: Just like a cork…like a cork here (holds up a cork). And then they hollow out the inside and then they put the fire inside of it.

C: To keep away the Doifis?

I: No, just to keep warm. But the point is the wood doesn’t burn

C: (Simultaneous with the wood doesn’t burn) But wait…but it’s not in their house.

I: No, the point is that the wood doesn’t burn. The wood, in theory, this folklore that I’m giving you, is that the wood, every other day of the year, you could cut it down and use it in your fire, but you can’t on this one day…if you cut it down you can make a chimney out of it and the chimney won’t burn down. Just the wood that they put inside the chimney.

I: That’s the folklore

I: Should I draw this for you? They put the chimney…I don’t know…The chimneys that I saw were outside…In the street. Where the snow is, where the doifis do this big dance and all the kids have to go see it even though they’re terrified.

C: Ok. I was just wondering because to keep them warm, but then they’re inside and the chimney is outside.

What the Folklore means to her?:

When asked what this folklore meant to her, the informant responded, “It means that…the other day when I was talking to this guy…about…you know…like, um…farmers and how they have all these crazy things *laugh* like on this moon you gotta do this and that…I was like, “Oh my God I know when that’s true!” and people think I’m nuts” 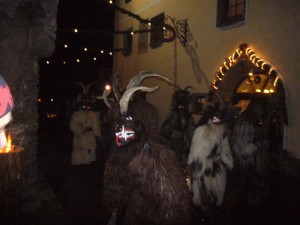 I: “Because it’s just so like traditional and cool, you know? Like I’ve seen it and I…I feel like…they have a lot of weird things. Like you know you can’t cut your nails on certain times like at the end of the month, you have to do it at the beginning of the month or something…like…Sandy has these weird ones that people have taught her…through her life, in this little town, you know like? But that one…I don’t know…I just think it’s cool. Like it’s got this nice cultural heritage to it. It’s got this nice religious heritage to it and it’s just kind of like…it’s there, it’s this tree and it’s like magical, you know? And it’s really cool day that they use it for.”

C: “And people get hit with brooms.”

I: “Yeah..but I’m just saying it’s really magical and I like that and I…I think it’s sweet. That’s what it means to me…that I love Sandy (laugh). And I don’t like getting hit with brooms…Even by Doifis…Doifin I guess.

Do you believe this folklore?:

She said she chooses to believe it because it is cool, but she thinks there is most likely a scientific explanation. She said it probably has something to do with the moon (because it affects the tides and water etc.) and that with the moon placement and the time of year there is probably more water in the trees which is why they do not burn (or are harder to burn)

I think that the informant enjoyed the folklore for the very reasons she insisted. She finds it cool and fun. As an outsider, it was a brand new experience for her and it was a way for her to connect with the friend she was staying with who was a part of the community. Every time she thinks of the folklore she will associate it with Sandy. She also noted a religious undertone that she saw and as a religious person it spoke to her more than a secular event would have. Finally, the as a biology major the possible scientific explanation for the tree not burning would be something that would intrigue the informant.

Annotation: The Toifi are Christmas devils and a form of Krampus. Krampus can be found in an episode of the show “Supernatural” the A Very Supernatural Christmas.