NOTE: For a Russian transcription of this joke, please see item 1 on the uploaded image: 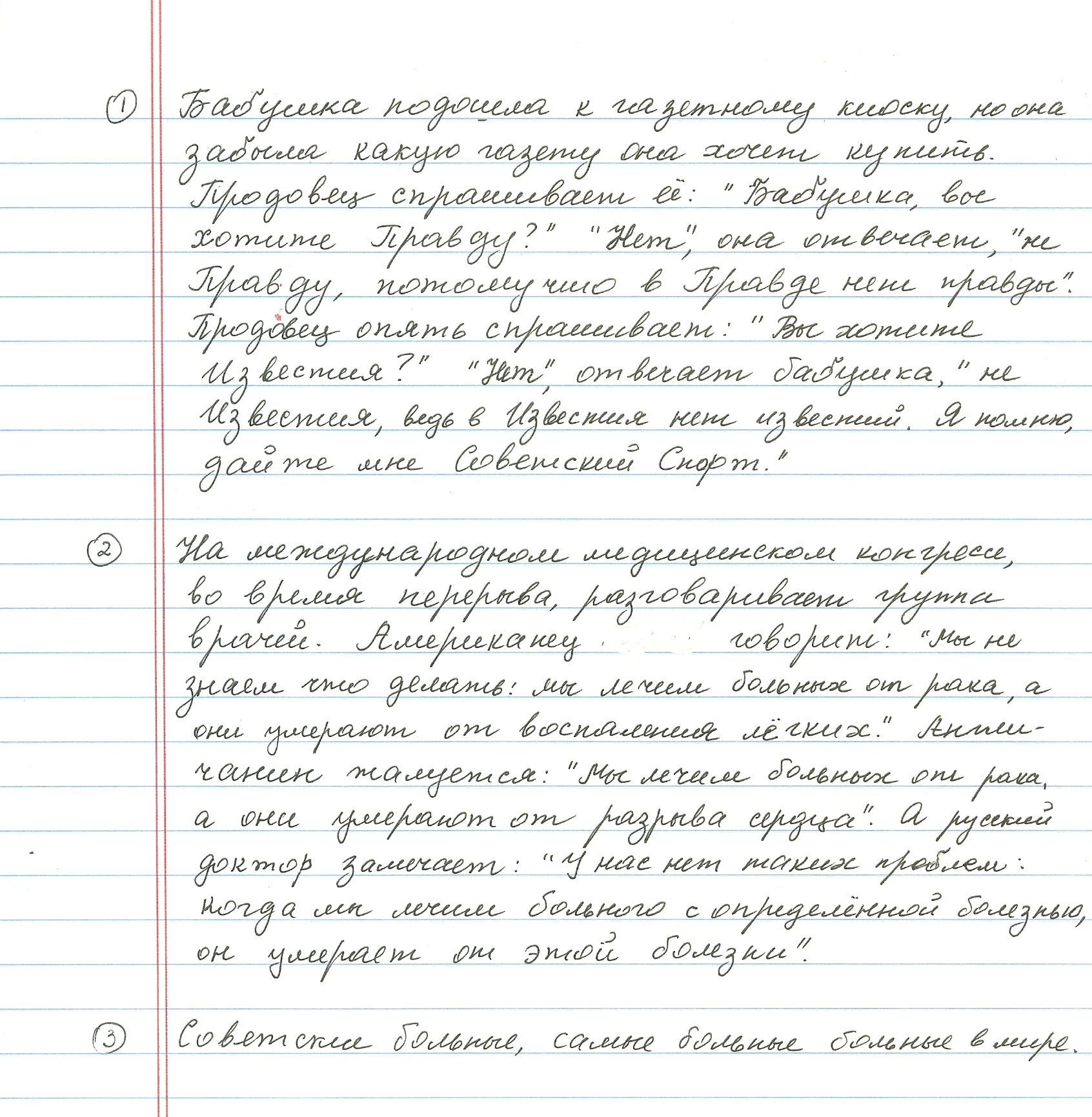 Q. What message is this joke trying to convey?

A. It’s saying that everything is just lies—there are no news, there is no truth. It’s a joke where people laugh at what is officially told by the Soviet party and the Soviet authorities to people, that these are not true news, these are not true truth, Soviet Sport is the only thing which reports the truth. So, it’s not that it’s worth reading it, I mean, my family didn’t read Soviet Sport because we were not into sports, but that’s the only newspaper which has truth—the results reported truthfully—and it is news, because the games were actually played.

Analysis: This joke laughs at the names of Soviet newspapers, which are called by such ridiculous titles as “Truth” and “News,” but only write the party line, so that they are not actually worth reading.

Q. Are these jokes that people would tell all the time?

A. Well, I remember them now, and I’ve been out of the Soviet Union for over thirty years. I knew them all my life. People would just sit down and they tell jokes, and if you have a new joke, that’s great. People learn those jokes, and they retell those jokes—it’s an underground joke industry. I don’t know how Soviet jokes originated, but all these jokes are something I grew up with, and thirty years later, I still remember them.

Analysis of Soviet Jokes: The Soviet regime was very oppressive. People constantly heard rhetoric about the greatness of the Soviet Union, and that it is a worker’s paradise, but in reality, the situation just grew worse and worse, and life only became bleaker. Thus, these jokes expose the population’s horrible disappointment in the regime. When I asked my informant whether people were idealistic about Communism in its early days, she told me that her grandparents were extremely idealistic about socialism, and believed that the Soviet Union would eventually become a great country with a high standard of living. When part of her family emigrated from Russia to Palestine in 1919, they invited her grandparents—and their children, of course—to come with them. But her grandparents declined, believing that socialist Russia would be a wonderful country. My informant’s parents grew up within this idealistic climate; in the 1930s, even though Russians experienced a horrible food shortage, people believed that since they inherited a terrible economy from the tsar, World War I, and the Revolution, the situation would eventually improve.

In contrast, by the time that my informant grew up, in the 1970s, the Soviet Union was corrupt through-and-through, and no one believed that there would be any improvement. In these jokes, then, we see people’s horrible disappointment, their cynicism, and their lack of hope for the future. The jokes never call you to resist the regime because resistance is futile and people feel powerless to change the system; rather, these jokes simply give people the satisfaction of laughing at the regime, an outlet for their disillusionment.