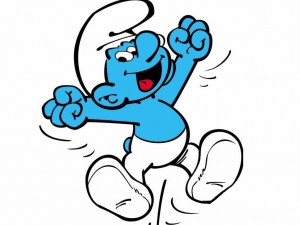 Ok…so when I was little I was in my “why phase”—I’m not really sure when that was exactly, I think I was maybe like four or five—you know that point in your life when you just ask why to everything? Ok, so every like, once every like, once every two weeks I would come home and see the bathroom and the toilet was, like, blue! And I would always go to my dad and ask why the water was blue, and he’d always say, “well, because a smurf came and peed in our toilet!” I didn’t question it—I mean… I was four or five so… smurfs exist right!? Um… but yeah, I just never questioned it until I started helping clean the bathroom when I was, like, 8? Until then I believed that smurfs came and peed in our toilet and made the water blue. He thought it was funny. I think its funny too…now that I know, like…I just think it’s a really funny story.

Haley’s story touches upon an interesting paradox of childhood: constantly questioning everything about the world but also believing whatever your parents tell you. Haley come from a very intelligent family that is scientifically and mathematically inclined—her mother is a doctor and her father a computer engineer. Being of a rather analytic nature, it is surprising that her parents simply didn’t explain to her that the chemicals in the toilet bowl cleaner made the water turn blue. Haley says that if she ever had a question about anything, her parents would take the time to sit down and thoroughly explain to her the details of what she was inquiring about.

I find that, being of such a scientific nature, her parents wanted to experience the magic of childhood in which the fantastical, the supernatural, and the improbable is generally preferred over the banality of reality. For Haley, the blue smurfs’ pee was an escape to a fantasy realm. Yes, she eventually learned the truth about the toilet bowl cleaner, but her mental dislocation from the real world afforded her a wonderful childhood.