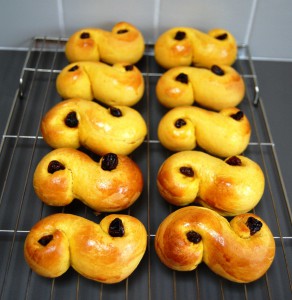 “Um so my dad has this recipe, it’s for, it’s halfway between cake and pastry, I’m not sure, it’s called coffee cake to be clear. So, it’s a standard dough, um it’s saffron flavored, sometimes raisins go into it, sometimes…[can’t hear the word], sometimes both, sometimes neither. And, it’s coated with egg whites and this kind of like um sugar that’s confectioner sugar that’s re-agglomerated, um maybe uh .2 centimeter sized cubes that are sort of crunchy, but they aren’t grainy and they’re vanilla flavored.”

The family of the informant’s father comes from Sweden, and this is a recipe that the informant learned from his father. His father always makes these cakes on St. Lucia’s day, a popular holiday in Scandinavia celebrated on the 13th of December. In regards to the holiday, the informant said that “what’s supposed to happen is the youngest female in the household is supposed to wear some sort of like crown of pine branches that has candles on it and present these cakes to the father of the family along with coffee.” His family, however, has only boys, so this part of the holiday is not carried out.

That the informant’s family (a mixed family, his father being from Sweden and his mother from China) still celebrates St. Lucia’s day in America, demonstrates the father’s insistence on passing along this bit of his heritage to his children. Even more indicative of this is that the cakes are still made despite the fact that there  is no female child in the family who could enact St. Luica. Also, that the informant knows this recipe off the top of his head further demonstrates the efforts his father made to instill this bit of Swedish culture into his children.