The informant is a fellow peer, who has ancestors from Denmark that were Vikings and who’s grandfather participated in a reenactment in 1949.

So my grandfather, Palle Gregard, was chosen to be a part of a viking reenactment in 1949. The Vikings were chosen by the queen of Denmark for the journey to reenact the viking trip from Copenhagen to London England. The best athletes and rowers in the country were chosen and it was a big deal at the time. The guys became instant celebrities . I believe the trip it took two weeks, and they landed at Broadstairs, England in July of 1949. The boat was an authentic replica of a Viking ship, built with no nails. And when they landed at Broadstairs, thousands of people were waiting to greet them cheering, and tons of newspaper articles were written about the landing there like in The Daily Graphic and Chicago Tribune.

My mom has snippets of these news articles and a pamphlet of the journey and a bunch of pictures of the ship and the Vikings and one of my grandfather. I remember visiting the Vikingeskibs Museet (Viking Museum) in Denmark about a year and a half ago, when I was traveling with my family. I was able to see the actual ship that my grandfather sailed in. Being at the museum and seeing and learning about the vikings and Denmark’s past made me feel very connected to grandfather, and I felt as though what I was learning in the museum was my past as well.

If I had the chance, I think I would participate in a reenactment like this one. Below are newspaper clippings from reports on the voyage, and photos of of my grandfather on the ship. I really love having this physical evidence of my ancestry and am very prideful of it. 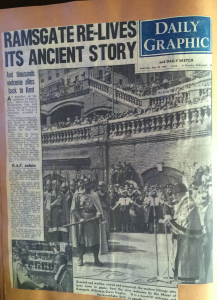 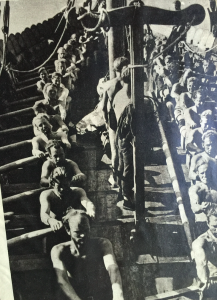 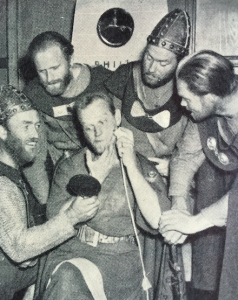