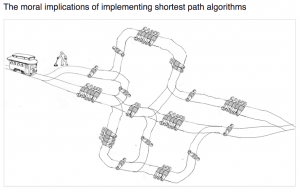 In the beginning of the semester my professor reviewed shortest path algorithms. Essentially the algorithm finds the shortest path from point a to point b. These algorithms are incredibly useful in many everyday applications such as google maps. This picture is a larger scale version of the Trolley problem. The Trolley problem is predominantly a philosophical one in which you stand at a lever. You can pull the lever and change the course of the trolley or you can do nothing. The trolley has no brakes and is headed for two paths. Generally, one path has only one person and the other path has multiple people. Some versions just have one path have more people on the tracks than the other. The idea is that you cannot remove the people from the tracks. Your only power is with the lever. You decide who lives and dies. This meme combines the ideas of shortest path algorithms and the Trolley Problem. My friend showed this to me at the end of lecture. She said, “I think this solve our professor’s problem lol.” I found it funny.  The meme provides a possible solution to the Trolley problem. However, people disagree on how this situation should be handled. The main debate is centered around the question, “Does one person get to decide the fate of others? Is that fair?” It is not clear whether or not the shortest path algorithm would be the best solution to the problem. It is a presented as a silly or trivial solution. It opens the door to thinking about this philosophical problem in terms of an algorithm. My friend is a computer science major with a game development emphasis. As part of the computer science community she collects and forwards a myriad of folklore specific to this unique group. Computer science folklore is unique and reflects the beliefs and the culture of the group. Per my informant, as well as personal experience, computer science majors have a unique sense of humor that develops from the difficult coursework, the long hours spent on the computer coding, and the group dynamic required to get through the major. This humor is often expressed through memes and jokes only members of this group can understand and appreciate.