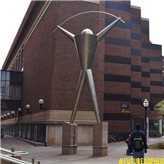 Background: My informant was a young Filipino  girl who was born and raised in Sioux Falls, South Dakota. She currently is a student at the University of Minnesota studying Double B.A. Global Studies and Cultural Studies.

Performance Context: According to the informant, the students talk about it a lot and spread it among the academic populace.

Main Piece: There are several student stories involving the stories of the statues around campus. One for example is that of the Platonic Figure. The students believe that if you walk under the Platonic Figure, you will not graduate in four years. Thus, the circle around the statue serves as a barrier that students walk around for fear of passing under the statue. Another statue that brings the opposite kind of luck is the Goldie Statue. The students say that if you rub the gold teeth and make a wish, it is good luck. A lot of students tend to come to this statue just before finals to give them a bit of extra good luck. Another time that they do this is before football games to “give the Gophers luck”.

To the informant, the stories are told because everyone wants to pass their classes. No matter the logic, everyone wants to cling to this mystic notion and give something as silly as making a wish in order to give them any edge that they can. The informant doesn’t believe in the Goldie myth as much as the Platonic Figure story. According to her, it’s less about believing and more about not taking the risk.

My Thoughts: I think it is interesting because it talks about how we form cultural ties within our own smaller communities, no matter how temporal they are. Even though college is a place of temporary establishment in our overall life cycle, a place for us to at some point leave and form new, different or join other communities, practices and rituals – by simply being a place of congregation it provides us an excuse to form connections with one another. Especially since school is also a place for business and professional connection, as well as social and (potentially) familial connection.