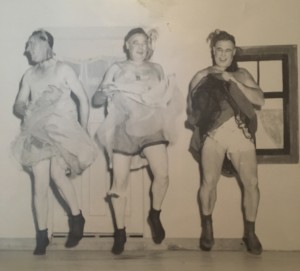 TM is an accountant who was born in Sunnyside, WA and now is currently living in Bothell, WA. He descends from a heavy Irish and Italian background which have influenced much of his culture growing up. His grandparents were the ones to teach him the most about his culture through their traditions and common sayings.

What were some of the traditions that you remember about your Irish side of the family?

TM: I remember that every family reunion my grandfather would get dressed up to do a special dance. I know many people these days know what the Irish jig is but not as many people can do it anymore. They put on this kind of fiddle music and would tap their feet and make hilarious faces. My grandpa used to do it with some of the other members of the family and put on a show for us. As a kid, I thought it was pretty funny. Was there any special attire they wore or special music they played?

TM: Well my grandfather also used to do the jig on St. Patrick’s Day as well and he would dress up in all green with the kind of clothes a leprechaun would wear. It was super bright and festive. I think I may even have a picture of it. He used to love to put that outfit on and I thought about how funny he must have looked. Um… other than that I can’t think of anything particularly special they wore. As for the music, I can’t recall the name the songs I just know what they would have sounded like. It was pretty much what you would think of when you think of Irish folk music, very upbeat and about the fiddle.

Did you ever learn this dance yourself?

TM: No. It was always an older generation tradition that I guess no one younger really cared to learn and we all moved and got busy with our own lives. Sometimes I like to pretend I can but I don’t think it would be very good…

Analysis: Although the jig is no associated with popular or basic Irish folklore I believe it is still a very important part of culture. The jig is a funny and charismatic dance that is often associated with jokes and laughter. It brings joy to everyone in the room and would often be associated with family get togethers or parties. It is a very social and happy dance. Although not popularly practiced it still lives on in memories and is taught more in Ireland than here in America.