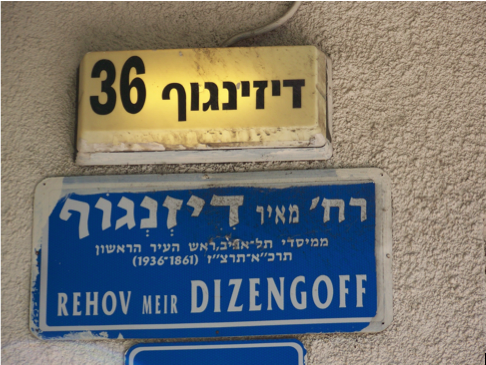 To Dizengoff oneself- to stroll down Dizengoff street

My mother, Aviva, told me about this slang, in one of our visits to our home country, Israel.

Aviva was born in Tel-Aviv, Israel, and is the 7th generation Israeli from her mothers side. My mother grew up in Israel and had immigrated to America in the last couple of years.

As any other Israeli girl, who lived in the vicinity of Tel-Aviv, and born in the city itself, I was very familiar with Dizengoff Street, a major street in the central part of Tel-Aviv, named after the first mayor. I used to spend time in the mall that is located there, looking at the new Israeli designers boutiques that seem to multiply towards the northern part of the street, and eating Cholent on Shabbat in Batia (/But yah/), the best cholent restaurant in town.  The street is old, never had it occurred to me that it is more than just an old street in the old part of the city.

This changed when we paid the desired visit to Batia restaurant while visiting Israel this past year. After we were done with the heavy dish, my mother told us, in Hebrew Bo Nelech Lehizdangef (Lets go Lehizdangef). As a girl born in the 90s, I started laughing and complimented my mother for her lingual creativity, only to learn that this was definitely not the case. And this is what my mother told me:

When I was a teenager, most of the social life of my age group was about spending time together, either at someones house or strolling together. The most exciting street to walk was Dizengoff Street in Tel-Aviv, which was back then considered the Champs-Elysees of Tel-Aviv. It was a long, quite wide street, with many shops, boutiques, and popular restaurants and coffee shops, and also close enough to the beach. Everyone strolled down this street; hence it was the right place to be seen in, and a good one to meet new people. It actually became an institution and so popular it was that strolling down Dizengoff Street created a verb in the spoken Hebrew- Lehizdangef. The street was so popular, that in 1979, a movie called Dizengoff 99 was created, which described life around this famous street. During the years, starting at the 70s, the street gradually lost its popularity to the modern parts that started developing in Tel-Aviv, but the verb still exists, and is also used to describe strolling down the streets in Tel-Aviv, mainly for window shopping and coffee drinking.

The story fascinated me, as I love to hear tales about the way Israel was in the past, as a new developing country. It seems to me that this period, when people really spent time together not via facebook, and enjoyed a more genuine way of social life, was a much happier one.