For as long as I can remember, my grandmother has kept an Evil Eye talisman hanging from the rear-view mirror of her car. During a celebration for my mother’s birthday, I pulled my grandmother aside and asked her the Evil Eye’s significance, following which she explained:

“Many years ago, two of my friends spent some time in Turkey. When they came home, they brought me an Evil Eye as a gift. All over Turkey, they put them outside of their door or inside of the car, and it is meant to ward off spirits by scaring them away. The superstition is that you cannot throw it away after someone gives it to you, that would be like inviting the evil spirits in. I have been in my car before and had people stop me and give me praise for keeping the Evil Eye visible, then show me where they keep theirs.”

I was somewhat familiar with the superstition surrounding the Evil Eye before talking with my grandmother, and knew that belief in the protection offered by one was prevalent in Greece. Hearing that her Evil Eye is from Turkey and that many other Americans have commented on the object (the informant, my grandmother, is from northern California), leads me to believe that this superstition is present in a great deal of cultures. Offering the object to someone as a gift encourages them to engage in the superstition surrounding it, because the object will remind the receiver of the giver while also supposedly serving as protection. Even if the owner of the Evil Eye does not necessarily have a deep-rooted belief in spirits, the object is significant in that it can offer a sense of comfort for the owner to suppress any worries that the spirits do exist, without the owner having to do anything more than keep the talisman somewhere close by. I myself am considering asking my grandmother for one to keep in my car, just in case.

The bull horn is worn as a talisman to guard against demons and protect its wearers from the evil eye. Another similar symbol worn in Sicily is the image of a fist with the thumb and pinky fingers pointed outward.  These symbols come out of a superstitious culture, and Gramma says as good Catholic people we are supposed to trust in God to protect us and shouldn’t rely on old superstitions.  They continue to be worn however because it is tradition, and even Gramma has them.  One of them is in the form of a keychain and resembles a red chili pepper more than an actual horn which I find quite amusing.  Whenever I ask Gramma about old traditions she dismisses them saying, “What do we know, were dumb immigrants and this sentiment reflects how, as for many immigrants of the early twentieth century, it was more important to become Americanized and adopt American traditions then to hold on to the old Italian ones.

Another tradition I recall Gramma telling me about is her famous folk remedy to cure ear infections. She was around five at the time she used to get pretty regular ear infections and ear aches. Her mother used to take her down to nursing mothers at the hospital and they would spray breast milk in her ears. Because she was so young, she doesnt remember if the home remedy worked or not. I dont think she uses this remedy anymore. She doesnt get ear infections anymore, but more importantly, she abandoned a lot of her old Italian ways the more she accustomed to American traditions.  Mary Z.

Mary later told me that the talisman, which looks like a chili pepper, evolved out of the phallic symbols of pre Catholic Italy, which she learned on the History Channel. More women than men wear this talisman as a way to ward off the evil eye, which is the blanket term for a curse that someone might cast on someone elses family. Although her grandmother does not believe in the talismans power to ward off the evil eye, she continues to wear the amulet out of tradition. Her quick abandonment of Italian rituals probably had to do with the fact that she settled in Cleveland, Ohio, a city that does not particularly have a high concentration of Italian immigrants. This talisman, also known as the corno, which translates into little horn, can be coral, gold, or silver. The horn part of the amulet is always gold or coral. It is common for non-Italians to mistake this amulet for a chili pepper. At the same time, many Italians today dont know the full origin of the corno and its homage to both the Lunar and Sea Goddess (Wikipedia.com)

Rose Scurria, Marys grandmother, is 89 years old and was a homemaker her whole life. She was born and raised in Cleveland, Ohio, but spent her childhood years travelling back and forth between the US and Sicily. Her family lived in the small mountain village of Lonngi. Lonngi is one of several poor mountain villages in Sicily, where residents wash clothes on rocks and essentially live backwards lives. Constant travelling and prior experience living in the mountain village of Lonngi has given Rose a wealth of knowledge as far as folklore and folk remedy go.

While I do not have a solid understanding of Italian culture, I can relate to the culture in terms of its belief in superstition and the power of talisman. I wear a cloth bracelet that I got from Brazil, which honors a saint in the Northeast city of Bahia. While the bracelet does not ward off evil spirits, it supposedly brings the person wearing it good luck if they tie the bracelet three times in a knot while making a wish. If anything, I wear the bracelet as a constant reminder of my Brazilian identity and belief in the good luck it brings.

Wearing an eye as a means of protection against harm, jealousy, and ill-will 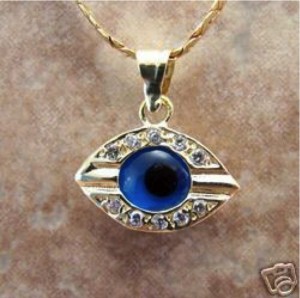 Right after baptism, some Armenian babies are clothed in all white, with a blue eye pinned to their clothes. Adults will wear it as well, as it is supposed to act as a protective mirror that reflects curses and evil back at its source and away from its wearer. According to Mary, the powers of the eye will be greatest if it is a gift from someone elsethats much more effective than if you just get one for yourself she said. Mary showed me her eye, which she always pins to her bra. I was not able to get a picture of it, but it looked very similar to the one in this photograph (Mary spoke of the eye only in terms of pins or brooches, however, and did not mention necklaces). Marys brilliant blue eye was set in a golden plate. She said hers was very strong because it was a gift from her mother. She told me that because there is no one who cares more for ones welfare than ones mother, an eye from ones mother is the strongest kind. Mary learned of this from her mother and her grandmother, but told me that many Armenians believe this. She also added that it was not at all a matter of religion.

When I heard of this, saw the gorgeous pin, and watched my friend explain to me the power of her pin with unwavering conviction, I was intriguedit was not only until much later when I did some research that I found out just how widespread and thoroughly studied a tradition this was, known as the evil eye. Mary, however, did not mention to me that she believed in any people who could cast the evil eye (a belief that seems to resemble the Azandes ideas of magic)instead, she seemed to believe that her eye was meant to ward off general negative energy and evil influences. She used the word devil a lot, but said it doesnt have to mean the real devil, but just, you know, evil.

It was also an interesting detail that she believed that the effectiveness of the amulet increases depending on who gave it to her, and on the degree of sincerity with which it was given. To me, this is a very interesting, almost modern, twist on this ancient superstition. It is almost implies an it is the thought that counts attitude. It is an idea that suggests that the power lies not so much within the eye-resembling object itself, but within the love of a mother or sincere friend. This, to me, suggests influence by contemporary metaphysical thinking.