Doge is a slang term for the word “dog.” The most typical form of the meme contains a Shiba Inu dog staring at the camera with what looks like an approximation of a skeptical human face. Written over the image (usually in comic sans font) are sentences with intentionally poor grammar (Ex: very wow, much concern, so scare).

The image is circulated on forums across the internet, most often on Tumblr, Reddit, and 4chan. There is no real specific time that is is supposed to be used, other than when the poster finds it to be humorous. However, after the image and internal monologue phrases went viral on the internet, companies, news broadcasters and politicians began to utilize them when trying to reach a younger demographic.

Use in American politics 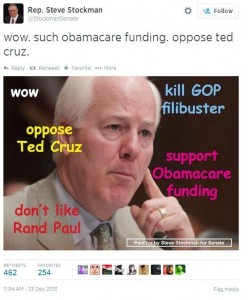 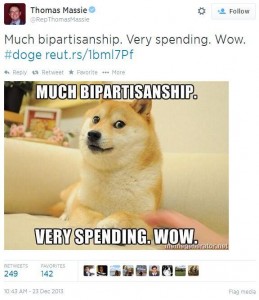 This piece of folklore combines several things that are consistently popular on the internet: cute animals and bad grammar. There seems to be little reason for the initial circulation of the image other than that it made people laugh. However, the continued use of the meme seems, for many, to be a way to identify oneself as a member of the internet community. The use of the image or phrases by politicians and companies seems to be a somewhat misplaced attempt to connect with the “younger generation” who spends more time on the internet. These attempts are usually mocked in online forums, proving that the point of the meme, as folklore, is to connect a certain group of people (common internet users), and when it’s used outside of that context, it doesn’t carry the same weight.