The following story is collected from my friend. She lived in Turkey for the most part of her life. Now she lives in the U.S.A. She talks about a mystical experience she had. This interview is done face-to-face. “A” refers to me, the collector. And “B” refers to the participant.

A: “Is there any interesting story you can tell me?”

B: “Last year, when I was walking around at the Beverly Center, a woman, with her daughter, approached to me and asked me if I have any problems in my life right now. At first, I thought she was crazy. But then she started talking about how the negative energy in my life affects my love life and academic life. Then she offered me to go to downstairs, so she can tell me more about my life. I thought she was a con artist, because she asked for money. But then she told me that, in her religion, there is usually no such things as dark magic, but she informed me that I am under the influence of a dark magic spelled by a woman, and that is the reason why everything in my life was unstable. She told me she can help me with it, but after she asked for more money, I just could not decide, and left her.”

A: “Did she tell you anything specific that is real?”

B: “She told me that, if there is something going well in my life, it will only lasts for a couple of days, like 10 to 15 days, but after that, everything just turns around and then it starts to go bad. She was right about this, my life is exactly how she explained it to me. Whenever a good thing happens, it does not last for too long.”

A: “Do you think she had mystical powers?”

B: “Yes I think she had some, but I don’t think everything she told me was true because of her mystical powers. If this is her job, I am sure she became good at understanding people quickly.”

I think it is interesting to see old traditions, like fortune telling, can be seen in very modern and urban places like Beverly Hills.

Original Script: “Basically he Armenian culture has this thing where they can get the fortune read through coffee…it has to be…they have a specific coffee powder that they use…usually a group of woman gather at a table and the coffee is poured. It is usually the oldest woman who reads everyone’s fortune at the table, you know ‘the wise woman.’ Who my cousin mentioned was kind of scary…Anyways, after they drink the coffee the head lady reads the fortune…it is kind of like Harry Potter at that part where the lay was reading tea leaves…kind of like that. Basically my cousin fortune was true that she got from the coffee reader. The wise woman told her she was going to get married soon…and she did! It was really cool”

Background Information about the Piece by the informant: Kamilah and her mother have always been spiritual people. The belief in witches, demons, and angels is strong to Kamilah’s mother however, it is even more so in her home country—Nicaragua. While Kamilah did not particularly believe in witches as her roots from Nicaragua do, the case with Rosario Murillo, really made Kamilah a strong believer in them. However, while Kamilah is not technically Armenian, her closest friends, who are like her family, are. Thus, she is very familiar with the nationality and practices of the Armenian folk.

Context of the Performance: Getting a fortune read

Thoughts about the piece: When Kamilah had told me this story about the coffee reading, my mind automatically went to the pop culture Harry Potter series before she had made the comparison herself. I knew that there were cultures that believed in the drinking of an herb (in this case coffee) could tell one’s fortune, however, hearing the process from Kamilah was a very fascinating experience. As mentioned, the connection with the pop culture phenomenon of Harry Potter, was an interesting parallel to this Armenian practice, for both have an elderly woman communicating the fortune to the individual out of a herb like substance. Additionally, I thought it was very interesting how they have a “wise woman” at the head of the table. It reminded me of the previous story I had interviewed Kamilah about (one that was about witches in Nicaragua) and that being personified as a witch is attributed to people fearing a person. In this setting, to me, it seems a that this fortune telling can be attributed to witchcraft because of the group not only being compiled of woman—and only woman—but also for the fact that there is a head “wise” witch, a woman which all the woman look up to as a leader and also fear her—personifying the woman as a witch.

Moreover, it is also interesting how it has to be a specific kind of coffee for the fortune telling to take place. With the group of woman, and the specific type of coffee, the coming together of a fortune seems almost ritualistic. Especially, the going around of the table to tell one another’s fortune as well as the wise woman being the head of the table, and also the only one to tell the fortunes—seems like it is all part of a ritual. This also brings in an interesting question, and opposition to the common American belief, in respecting elders. While America separates themselves entirely from the elderly—having specific designated homes for the elderly and having one of most developed retirement programs in the world, most foreign countries have a great respect for their elders, specifically their wisdom which is shown in this display of fortune telling among the Armenian women.

Furthermore, I think it is interesting that even though Kamilah is not Armenian, she does believe in some of the customs of the Armenian people because of her closeness to her friends. This adds the notion of culture being learned and not being something one is born with. Thus, her cousin—whom she is also close to—going to one of these fortune telling rituals, even though not Armenian, and the fortune actually becoming true, initiating the belief in both Kamilah and her cousin tells us that culture can be learned. Hence, this ritual can also be seen as an inanition to a kin group. 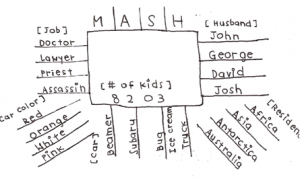 This is a grid for the children's game, MASH

My informant first learned how to play this fortune-telling game in her middle school in Downey, CA from one of her girlfriends during lunch time.  In MASH, on each side and corner of the square, you write a list up to four items you desire or absolutely hate.  For example, one side of the square can have four names of potential husbands.  On another side, there could be four names of the cars you may have in the future.  MASH is at the top of the square indicating if you will live in a mansion, apartment, shack, or a house.  The girl whose fortune is being told must close her eyes and at any time says, “Stop!” while the fortune teller would be drawing sticks.  When the fortune teller stops, she counts how many sticks she has drawn.  Then she counts from the “M” on the square around the square counting to however many sticks she had drawn.  Whenever her count ends, she crosses out whatever item she lands on, and continues with her count again until only one item from each category is left.  In the end, the girl will discover who she will marry, what kind of compartment she would reside in, what her job would be, how many kids she’ll have, what the color of her car will be, what her car will be, and where she will live.

I have also played this game several times as the fortune teller and as the person whose fortune is being told.  It can take up a lot of time when needed and is quite entertaining.  It is especially fun for girls because most girls typically like to daydream about who their husbands will be or where they will live in the next ten years and so on.  Favorable results can be exciting and unfavorable results can be funny.