The meme: “It’s like a frog cartoon that…people use as a reaction image…I don’t know??? Some people use it to express sadness.”

The informant is a college student who gets on Tumblr every day, regardless of having a love-hate relationship with it; the website is where she first encountered Pepe the Frog, but she says that she sees it used on Twitter as well. When I asked her what she thought when she first saw it, she said, “That it was another dumb meme.” I then asked her if she knew the exact origin of Pepe the Frog, to which she responded, “No, Amanda.” Further research on the website KnowYourMeme.com shows that “Pepe the Frog is an anthropomorphic frog character from the comic series Boy’s Club by Matt Furie. On 4chan, various illustrations of the frog creature have been used as reaction faces, including Feels Good Man, Sad Frog, Angry Pepe, Smug Frog and Well Meme’d.” The meme has spread very rapidly in the last year. This is probably due to the popularity of Twitter, Tumblr, and Reddit recently. Even if people don’t know the exact origin, they find it funny and worthy of using. The Internet is a weird place. 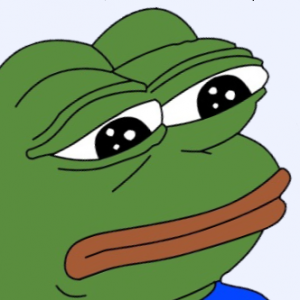