Literal Translation: You only know a person after you’ve eaten through a whole sack of salt with him.

Meaning: It takes time to really know get to know someone.

I was at home from college for a weekend and I was spending time with my family, which involved mostly listening to my mother gossip about her friends. She began to talk about someone whom we both knew that had turned out to be quite a different person that what we had originally thought. We had misjudged that friend’s character, and while it wasn’t anything too serious or dramatic, my mother shook her head and said a Bulgarian proverb I had never heard before: “cамо знаеш човек след като си изял цял чувал сол с него,” or “you only know a person after you’ve eaten through a whole sack of salt with him.”

Upon seeing my confused face, my mother explained that since one would sprinkle only a little bit of salt on one’s food occasionally, it would take an exceptionally long time to eat through a large sack with someone. However, that amount of time is necessary to truly understand a person’s character, given that personalities and circumstances are quickly liable to change.

Since salt has been a common spice used in Bulgarian salads, dinners, and various meals, there was bound to be at least one proverb using it. I feel that my parents and relatives that live in Buglaria use salt much more than I prefer to do, either because they prefer saltier food or I am more used to the plainer cuisines I eat in California. Whatever the reason and wherever I am, people agree that it is important to know and understand whom one is with.

Informant Bio:  The informant was born in Yerevan, Armenia, where she attended a Russian school.  At the age of fourteen she and her family moved to America, where she was formally introduce to the English language and had to continue going to a school where the primary language was English.  She has had exposure to both Armenian (from her youth and family) and American folklore (by living and studying in America).

Context:  The interview was conducted in the living room of the informant’s house.

English Translation – “When it is raining, you need to make a cross on the floor with salt so that it will stop”

Informant Comments:  As a child, growing up in Armenia, the informant believed that making a cross on the floor in salt actually was the reason why the rain would stop.  Now, she no longer believes this and has not passed this folklore on to any of her children.  She does not think making the cross would be a bad thing, but simply thinks it is not a necessary act to stop the rain.

Analysis:  Making a cross on the floor may have some connection with the fact that most Armenians in Armenia are Christian.  Since rain is sometimes considered to be the “tears of God”, perhaps making a cross on the ground that the rain falls on is a way of making the tears/rain stop.  The roots of this folk belief could be numerous; this is merely one possibility.  I do not think that it is in anyway required to stop the rain.  However, if children would like to feel that they are in some way in control of the weather (even when they are not) I see no harm in telling them about this folk belief.

Although she is from Vietnam, my informant attends college in Finland. When I interviewed her, she was at USC for a semester abroad. Even though she has been living in Finland for the past few years, the folklore she is familiar with is very strongly influenced by her Vietnamese upbringing.

Below is an example of folk speech that she uses. (picture of text in Vietnamese attached)

Translated, it means “Add some salt into it.”

My informant uses this phase when amongst her Vietnamese friends, after a particularly bad joke.

What she means with this phrase is that the joke was bland, or “tasteless”. It’s taken good-naturedly by her friends, who respond in kind when she makes jokes that weren’t funny.

My informant said that one of her American friends has also adopted this phrase. Instead of using it in Vietnamese, however, he uses the English translation. She finds this amusing, but is also perplexed that there was no English equivalent. 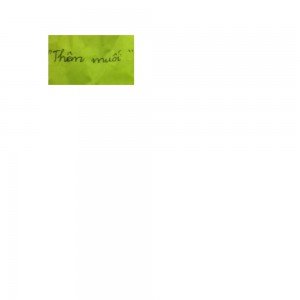 If you spill salt, you must take some and throw it behind you so you wont be unlucky.

My informant first heard about this superstition while he was watching a movie.  He was watching the movie Just My Luck starring Lindsay Lohan.  In the movie, Lindsay Lohan is the luckiest girl in the world.  However, she meets a really unlucky guy and through a kiss their luck switches.  Lindsay Lohan becomes really unlucky and while she is in a restaurant she spills salt.  To not get bad luck, she takes some of the salt and throws it over her shoulders.

Salt is associated with a lot of symbolism and superstition.  In ancient societies, salt was very expensive to buy and was a very precious product.  Salt is used as a preservative and in someway began to symbolize life.  Salt also became a sign of hospitality, trust and friendship because of how expensive it was.  Therefore to spill salt was a waste and many people believed that bad luck came to the person who spilled it.  Some people also believed that if salt was spilt in a particular persons direction then bad luck would come to that person.  Some people throw salt over their shoulders.  However, salt must be tossed over their left shoulder and into the face of the Devil.  Therefore, spilt salt should never be cleaned up.  Some people also believed that enough tears must be cried to dissolve the spilt salt.  This would reverse the bad luck that was coming to the person.  Another superstition for salt is that salt is thrown on the threshold of a new house for good luck.

If you drop salt you throw it over your left shoulder.

Jasmine learned this proverb from her mother and she said it was practiced by other members of her family. She is not quite sure of its origination or meaning. She said, All I know is that it means bad luck if salt is dropped and not thrown over your shoulder. This superstition would occur whenever you drop salt, whether it is in the kitchen, at a dining table, or out to eat, one is always supposed to throw it over your shoulder. Jasmine was not sure what shoulder one should throw it over, but she said that she usually throws it over her left shoulder. This superstition is also found in Western Folklore and 101 American Superstitions.

Because Jasmine new very little about the meaning and purpose behind throwing salt over her left shoulder, I decided to do a further investigation. I found out that throwing salt over your shoulder comes from biblical practices in early Christianity as well as Buddhist tradition. In the book of Deuteronomy, chapter 7 it mentions this proverb. Salt, during the biblical period was considered a valued commodity; it was expensive, crucial in preserving food, and was often used as a mode of currency. Therefore when one dropped salt it was almost considered to be a sacrilegious offense, and would then be left in the hands of the devil. Therefore, throwing the salt over ones shoulder was a way of warding off the devil. The salt is either intended to blind the devil so he cant witness your error, or keep him from sneaking up on you while youre cleaning up your mess.

The reason behind throwing the salt over the left shoulder is because in many ancient traditions the devil is always seen to be placed to the left. For example, the classic image of a devil on one shoulder and an angel on the other often shows the devil sitting on the left side. After looking at a Christian point of view I also found this superstition in Buddhist traditions as well. Buddhist also believe that throwing salt over ones left shoulder is a way of repelling evil spirits. I am aware there are most likely many other various meanings of this proverb that I have not addressed in this analysis, however, knowing just these two helped me grasp a better understanding of why people considered dropped salt as bad luck.