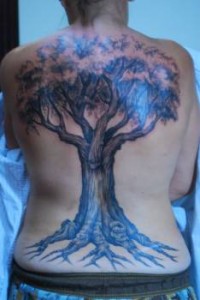 “There’s a couple different reasons I got the tattoo. One, I had been meditating on this verse in Jeremiah that talks about when we put our trust and confidence in God it’s like this great tree with these deep roots that are planted by the river. And during times of drought, and uh, you will not perish, uh, and you will bare much fruit. And so my tattoo is of this tree with these deep really roots to remind myself that I need to put my trust and confidence in him. And that is where my strength comes from. And so that’s the idea behind the tattoo. Um, but I had always been interested in tattoos and um, I also had a very large scar all the way down my back and so I had wanted to put a tattoo over that. And so now, the tattoo that I have now, um, is a beautiful reminder instead of, um, a painful scar. And um, it reminds me of Christ and his love and were I put my strength in.”

The informant is a 33 year old minister from New Mexico who has lived in Los Angeles, California for almost ten years. When she was in her pre-teens about she had scoliosis so bad she had to get a rod put in her back to straighten it – that’s where the scar up and down her back came from. The informant only got the tattoo this past fall. Before she settled on the tree that she got, she had thought about other designs to tattoo on her back like angel’s wings.

I find it interesting that perhaps a half a year before the informant got her tattoo I was talking to her brother, a Denver, CO resident about tattoos and he had mentioned that tree tattoos were pretty popular right now. I have even considered getting a tree tattoo in the past few years. I’m not sure how much the popularity of tree tattoos played into her decision, though. I think it’s clear that this tattoo has a deep meaning for the informant that, like the tattoo itself, is only partly apparent to the passerby (most of it is normally covered by a shirt). The informant has clearly been through some rough times (though she is one of the strongest people I know) and this tattoo reminds her of where her strength comes from and allows her to cover those painful memories with ones that build her up. Essentially, I agree with the informant’s analysis of her tattoo.

I find it interesting that the informant, an Evangelical Christian minister, decided to express her faith through a tattoo. Not 50 years ago tattoos were considered repulsive to many Christians and there is still the notion that conservative people, especially conservative Christians, don’t get tattoos. The informant certainly fits the stereotype of who doesn’t get a tattoo – she was raised in a conservative Christian home where her father converted from Catholicism to Evangelical Protestant Christianity. However, it may be that the church she grew up in was rather divorced from that strict religious ideology. The New Mexican church her family has been a part of for over 35 years was started in the Jesus People Movement – a movement where large numbers of hippies converted to Evangelical Christianity. As hippies were known for breaking the strict rules of their parents, it makes sense that a Christian movement started by them might be more loose with traditional Christian rules than church movements founded by more strictly rule-abiding Christians. Still, that I know of there is no encouragement from within this church movement for people to express their faith through tattoos.

I think the story about the informant’s tattoo is as important as the tattoo itself. In fact, one cannot be divorced from the other. The tattoo is deeply symbolic to the informant and is an outward expression of her identity as a Christian. The depth of the story behind the informant’s tattoo is reflected in a website about tattoo meanings that quotes John A. Rush’s book Spiritual Tattoo,”It is important to study the myth connected with the images you choose, and if the images are of your own creation, make sure there is a positive outcome to the story/myth. Your tattooing should tell a story, with a beginning, middle, and end, a story that takes you past the old symbolic references that have bound you to an unhappy, unproductive, torturous existence, a history that you created. You need to build a story that brings you out of the old and into the new (p. 191).” The informant’s story inadvertently follows this recommendation exactly. She took a myth – a verse from the Old Testament book of Jeremiah – and used it to turn a painful memory into a positive memory, from the old and into the new. Her story also has a beginning – the scar, a middle – the meditation, and an end – a physical reminder of her strength in God.