This is how my paternal family makes tacos.  They are known in Spanish as tacos dorados, tacos de papa, tacos frítos. In English, my informant calls them potato tacos.  My great-grandmother came to America from Durango, Mexico and my grandmother learned from her.  The most important and unique thing about these tacos is that they are made with potatoes mixed with meat and are then fried.  These tacos are typically made whenever, as my informant tells me, her family is there and wants tacos.  Since potato tacos are difficult to find outside of a heavily Latino populated area, the tacos represent family ties and our Latino identity to my family, especially since all of my grandmother’s children moved very far away.

Prepare meat for texmex tacos, because this is texmex

I just fill it up half way with the potatoes

And you put the 6 potatoes, peel and slice then you put them to cook and I say at least an hour until they are soft. You put a fork in them to check. And like I said you have to touch them with a fork because you don’t want them to harden.

The meat sho8ld be fried and drained in an hour.

The rice you put two table spoons of oil on a pan to fry the rice. I just pour; I don’t measure when I cook anymore. Put 1/3 of oil to fry the rice when you have a cup and a half of rice. This is where you have to be very careful with this one’s. Sometimes it gets stuck at the ends and that’s when it burs really fast so you have to keep stirring it till it gets a light golden color

You put about 1/4 of tomato sauce and a cup of water with it.

Almost, not quite. I want to see one pop

You put too much tomato sauce it’s going to become pink. So it’s easier for you.  You use two table spoons of tomato sauce.

Stir it from the outside in.

About two cups and a half cup of water

Let me see how the salt is

You boil it until it gets really hot then you cover it and let it steam. That’s how the rice gets real nice.

I’ll move this back and start on the meat

With an onion mija you only need half of a small onion. You don’t need that much onion.

When it’s boiling hard you have lower it than cover it. And that’s how it steams real nice.

This is about a table spoon of oil to cook your meat. And then you have to drain it.

Now the pepper, be careful it doesn’t get in your nose. I just squeeze it like this. Now you stir it.

Ok, let’s put the top on. If you have more time you can turn the fire up and cook it faster.

See how they cook fast

When to potatoes are done I turn them off

You just have to wait for them to cook

Get a fork and taste it. If it needs salt or pepper, add it.

I’m going to heat up the tortillas and you fill them with the meat.

Use a spoon. Don’t get too close to the edge or the oil with pop and you get a scar like this.

(What do we fry the tacos in?)

About a tea spoon of oil

I usually use, how much is that. A cup and a half of oil. You don’t want to use too much or else the meat will fall out.

I think I put in too much oil, so be careful about that

Roll up the lettuce and cut it.

(Oil pops) Eyi, I hate that. That’s where I get all the burns on my arms and my face. I wish I had a sifter for the meat

I have to be careful with that one. When the tortilla was putting up it got a little hole in it

Oh sush (to the tacos)

The slow one is going to go in first like this

I learned the cooking from my mother. My mother had all three

Whenever there is family that wants to eat tacos that night

Because it please my family and I enjoy feeding them 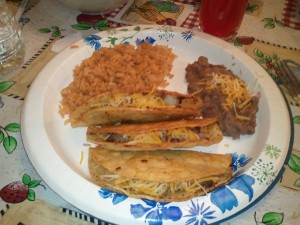