This is a recording of my informant’s mom singing a Nigerian folk song about the Udara, a fruit common in Nigeria. Her mom would sing it to her often when she was younger. The story behind it contains the classic evil stepmother and a magical element. The translation is as follows:

produce fruits for the motherless

produce fruits for the fatherless

My father’s wife bought Udara from the market

Ate all with her children

Gave none to the motherless

gave none to the fatherless

This life is vain

It is from a story about a boy whose mother dies and is left with a stepmother that buys fruits for her children but not for him. He finds an udara tree and begins singing to it, and it produces fruit for him. The stepmother sees this, so when he is gone one day they come and try to sing to the tree and get its fruit. He catches them, and sings to the tree that it carries the one of the children up far away. The stepmother and other children apologize and agree to treat him well in the future, so he sings again and the  tree brings the other kid back down. They never treated him bad again.

MR heard about the legend of Oniontown at a summer camp a few hours away, in New Milford, Connecticut. Him and his friends didn’t believe it was real, so they went on a legend quest to see if it was true. It’s a bit of a memorate in that their own personal experience might have been due to other causes, but fit into the legends surrounding the place and and therefore they (at least at first) attributed their experience to what they had heard about inbreeding and meth cookers, despite acknowledgements that the town might just be trying to keep all these dumb kids out.

“Oniontown is a tiny town surrounded by urban legends. People say that it’s a place where people are giant inbred mutants. It’s a lawless society where mutant people will drag strangers out of their car and beat them to death. Police overlook it, though it is only a few miles from civilization.  It supposedly has a giant statue of an onion in the town square.

I was friends with camp owner’s son, and the counselors & them went to go and prove it wrong since we were so close and obsessed with urban legends. We got a van together and went to check it out.

They made a rule that if anyone gets too scared, they would turn back, no questions asked.

As they are driving, it starts getting more woodsy.

Two of the people get freaked out and don’t like way it looks. They decide they’re too scared, and ask to turn back.

Ok, fine, so we turn back, but then we get lost. We have no clue where we are. We got so lost that we ended up right near the main road to Oniontown. We decided we might as well go check it out, so we drop our scared friends off at McDonalds and tell them we’ll go explore and come back for them.

The stories say that first the road will turn to gravel, then get narrower and narrower, then mutants will come.

The first thing we see is a junkyard on right named “Murphy’s autobody,” which we take to be a good sign because Murphy is last name of guy driving car. Which, by the way, is a piece of shit car. It’s a van driven down from Canada, old and decrepit, which was given to the guy to run into the ground since it’s near the end of its life).

Then the asphalt turns to gravel.

The two car road changes to a one car then narrows even more to barely a one car road. We wonder how on gods green earth do people get to this city.

We come around a bend and stop. Headlights turn on in front of us.

Three enormous guys get out in road in front of us, huge ass guys, seven feet tall, and one is holding a cinderblock.

The mood in car turns from laughing to complete horror. One guy throws a rock, and the entire windshield shatters.

On of the other guys throws something else at passenger window, and that shatters too. I was in the backseat so it took a while for this to register.

One friend, who I credit our survival to his fast thinking, decided to drive forward. At the last minute he sees a branching road, spins the wheel and goes down that way and into a field. ACDC was on the radio, and my friend thought it was a good idea to turn it up. It was only funny later.

We go back to the road, spin around, and go back to MacDonald’s.Our friends are still there, eating a happy meal and taking their sweet time. We scream and motion for them to get in the car. They get up, take their time, throw away their stuff, not aware of what’s happening. Just then the truck with the guys pulls in and comes around other side of parking lot and rolls down the window.

A guy says: ‘You think this is a joke? Think this is funny? don’t ever come to our town again.'”

MR thinks that because so many people heard about onion town and started to visit, people got tired of strangers coming to town and now mess with people. He also still thinks there’s something fishy going on, maybe cooking meth or something of the sort. There are weird buff hillbillies, nonetheless. 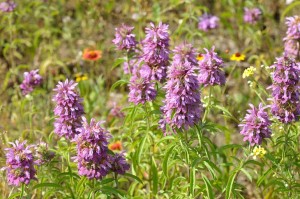 Horsemint is purple plant that grows in Texas. PL identifies it on nature walks, and often tells about how it was used as an insect repellant, which is how it got called horsemint.

PL: “One time a man was there whose dad used it often. His dad had horses, and would bundle up the horsemint, tie to rafters in barn, and shoe horses where the plant would rub on their backs. It worked as an insect repellent to keep flies off horses, that way they wouldn’t more or become too agitated for the farrier.”

Horsemint actually contains citronellol, a natural insect repellent, so it turns out the folk practice in this case is actually very functional. Bug sprays and other commercial products use the same type of ingredients.

A friend, CB, was visiting me from Texas, and heard me talking with my roommate about the bad dreams she had been having. Camila jokingly proposed that my roommate try this remedy that her mom always made her and her sister do whenever they had nightmares. It is used to remove bad spirits. CB’s mom is very spiritual and uses folk remedies and prayers often.

“So you need an egg and a glass of water and you say a prayer and then rub the egg all over your body in cross motions. After that you crack the egg in the water, put the egg under your bed or near your bed, and sleep. When you wake up the egg has collected all the bad energy and dreams around you and you have to flush it down the toilet to remove the energy.”

It’s interesting that an egg is chosen to soak up the negativity. From reading other sources it seems that the egg would start to smell after some time and the bad smell represented the bad energy that you would throw away. Another blogger mentioned that when it dries it leaves circles that look like the evil eye. I’d be curious to see if any more reasons behind it exist or if there’s anything that has to do with fertility.

Agarita is a Texas bush with sweet red berries protected by spiny leaves. The informant describes the family procedure for collecting and using the berries:

“To get enough berries to make jelly, you lay a blanket around the base, then hit the bush with a stick so that all the berries fall off. Old ladies used to then put all the collected berries in an apron, then toss them up to let the wind blow away all the debris, while the berries fall back down into the apron. My mom at some point decided to set up a fan on our porch, so we could just pour the berries from one bucket to another and not have to worry about tossing them. The fan worked much better.” 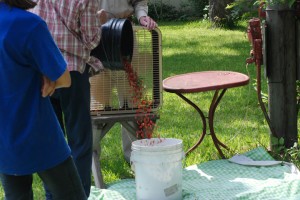 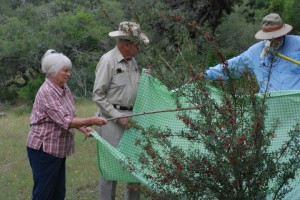 This folk recipe is made from a plant which grows in a very specific geographic area, mostly in Texas, and it’s interesting that throughout time the practice has evolved with new technology available (the fan), allowing for more jelly to be produced. Even living in Texas I’ve never seen agarita jelly sold at the store, so it’s interesting that it’s mostly a small family process passed down, and was never commercialized.