Objective: For fun or to determine winner by who has stronger legs.

Play: two participants lay down on floor facing opposite directions of each other. The participants count to three then raise the leg that is closest to their opponent and lock legs.  The person who is able to flip outwards with their opponents leg locked is declared the winner. 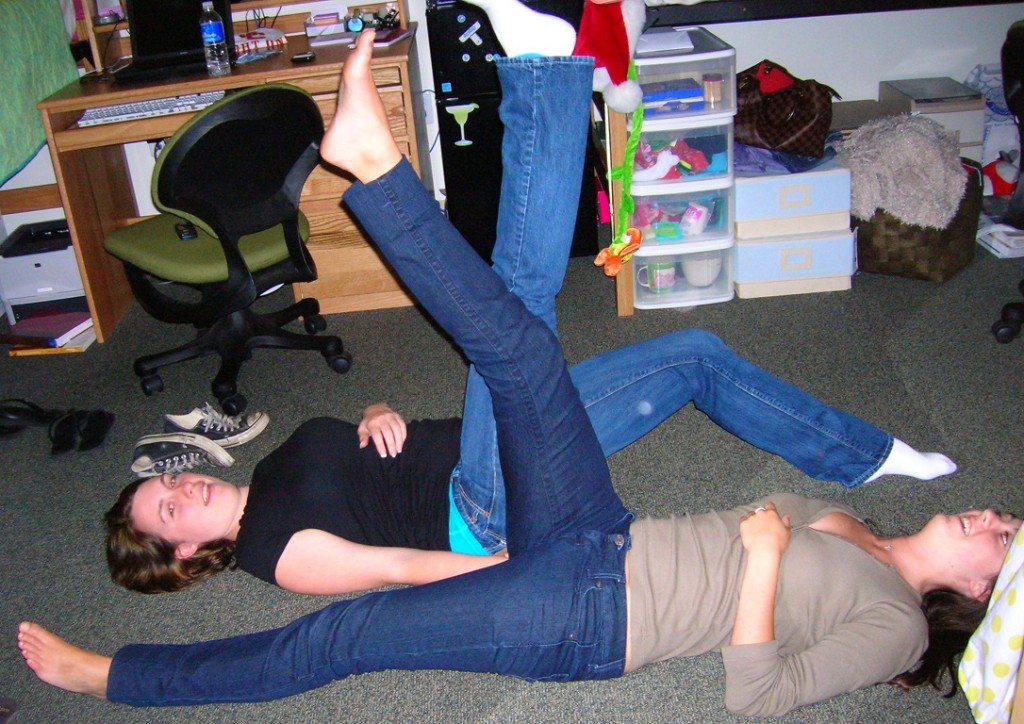 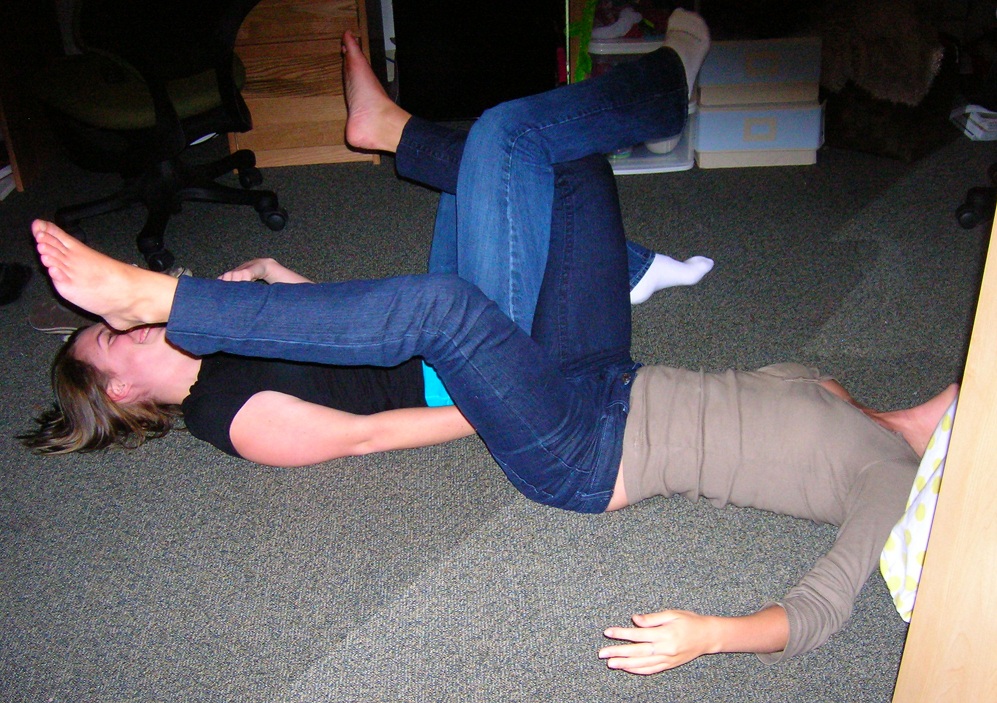 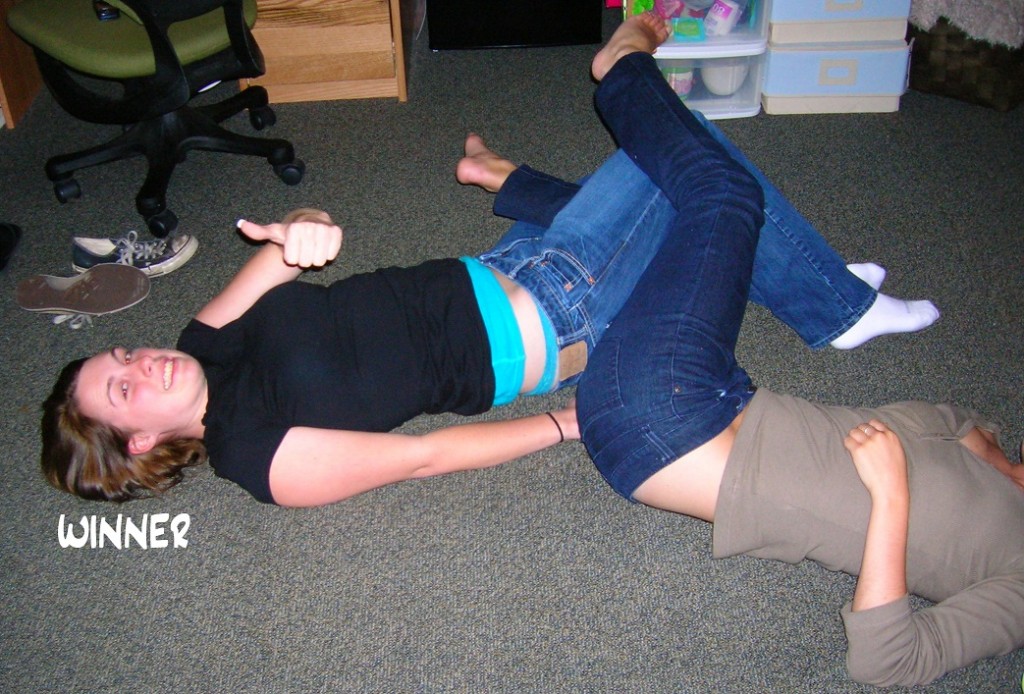 The informant normally did this when she was younger, age six to about age ten.  The game was played with her friends during Physical Education for fun when she attended school in Pasadena, California.  She said that it was a game just for fun when the kids wanted to goof off in P.E. and not do what they were told.

Although the informant said the game was just for fun, I think this game is similar to something like arm wrestling or rock paper scissors that could be used to determine seniority a separate game, chores, etc.  I think mostly kids do it because its encompassed by a physical playfulness that is common especially among children, but becomes less acceptable later in life.

There is a trail, up in the Claremont Mountains, called The Thompson Creek Trail.  A group of high school kids went up to the trail one night about ten to fifteen years ago (this is supposedly a true story).  They went up the trail to see if anything fun was going on in the mountains and to chill.  While walking, they walked over a bridge to other side of creek and found an old foundation of a house, often described as ruins.  One of them stepped inside of the foundation and jumped back out.  The kid was really freaked out and said he heard screaming when he stepped within the foundation; another kid tested this and claimed the same.   Suddenly, a silvery ghost-like figure of a woman appeared and told them to leave and that they did not want to know about the things that had happened there.  One of the kids asked what had happened and why they wouldnt want to know.  She proceeded to explain that her husband used to beat her in the house and one day he went crazy and locked their infant child in the house and set the house on fire. The child died that night and the screaming they heard inside the foundations was the screaming of the child.  Another one of the kids asked a question and the silvery ghost woman screamed a blood-curling scream.  All of the kids scattered and ran away scared.  Today, people go up the Thompson Creek Trail at night for the thrills, and according to hikers the foundation actually exists.  Sometimes people claim to see random piles of sticks and shabbily built alters, or even sacrificed animals by the foundations.

People tell the story in groups on occasions such as Halloween.  Hope heard it from her science teacher on Halloween when she was 15.  The room was dark with only Bunsen burners lighting the room, a suitable environment for ghost story telling.  The story was just for fun to scare everyone because Halloween is a time of year when everyone is trying to scare each other.

I think its interesting that this ghost story is about an actual place.  I think that the story was probably originally formulated to explain the unknownwhy are there ruins of a house in the middle of a mountain and what happened to make them ruins.  People often devise stories to explain the unexplainable.  The story also shows the curiosity of humanity as the kids imply further and further to the ghost woman, and people go up to see the ruins for thrills.  Mysterious things fascinate humanity, and humans often think that if they can physically see something then they will be able to explain it, hence why people go visit the ruinsto prove to themselves first of all, that the ruins are there, and second of all, that there is or isnt a ghost that haunts them.

This drinking game is typically played with rum.  Participants sit in circle and choose a Mr. Commissioner who acts like the leader in the game.  First, everyone participating gives themselves ridiculous names.  The game progresses in rounds and at the beginning of every round, all players take a shot.  Mr. Commissioner gets the first move, and then sends his move to someone else in the circle.  Play continues by knee slaps around the circle.  The number of knee slaps determines where play lands and who makes the next move.  For example, on your turn if you slap your knees three times, then clap, play passes three people to your left around the circle.  Players cannot respond to anything going on outside of the circle.  No one in the game is allowed to speak without permission from Mr. Commissioner.  The hardest part of the games is not talking.  If anyone talks out of turn Mr. Commissioner can make them do whatever he/she wants them to do.  This can vary from taking a shot to running around outside half-clothed.  Mr. Commissioner decides when new rounds start.

This game is played when alcohol is available and several people are present, typically played by people of high school or college age.  The informant says the game is just for fun and that the involvement of alcohol makes the simplest things, like counting and clapping/slapping coordination difficult, which proves to be quite comical.

I think this game plays off the fact that peoples inhibitions go down when they are drunk.  What makes this game fun is the fact that it gets so confusing and becomes hard to talk.  In addition, someone is more likely to carry out some crazy punishment when drunk because their inhibitions are down.  This displays the novelty of alcohol for young Americans and how it is used as a tool for fun.  It also shows how alcohol is perceived as an essential element of socializing and bonding within a group of young people, while the dangers of abuse are not really acknowledged.

Participants include everyone in a car, excluding the driver for safety purposes.  When on the road, if people within the car see a car that has a headlight out, then that person yells sex and everyone participating hits the roof.  The last person to hit the roof takes off a piece of clothing.  Play ends when the car ride is over.

The informant claimed that this game is played for fun at night in cars, usually when the car is full or there are several people in the car.

I think this game probably came about as a way to make a boring car ride more interesting.  It is common probably only with younger, teenage to twenties, crowds because of a sort of obsession and fascination this age group has with sex and nakedness.  I would guess that there is a link between the acknowledgements of a headlight being out and the word sex being yelled, since headlight is often using as a metaphor for female breasts, hence the game involving a taking off of clothes.

Performer: How do you get an elephant into a Safeway bag?

Performer: Take the f out of way.

Audience: Theres no f in way!

The informant likes to tell this joke in awkward situations, to release tension, or break the ice when meeting new people.  Its just a silly joke that plays with assumptions and words that cause the audience to make or break the joke.