Title: Turning of the Class Ring

Once the class ring is delivered to the student, the student must then go around the school getting other students to “turn” their class ring. When turning the class ring, the individual asked will rotate the ring clock-wise in a full circle on the owner’s finger. The owner of the ring will then ask the participant to give their signature on a list in a notebook (or other recording device) with the other individuals who have turned their ring.

Turning of the class ring is meant to bring the individual good luck and prosperity their senior year of high school as they round-out their high school education. The people who may be asked to turn someone’s class ring mostly include close friends, relatives, or significant teachers. Students in other grade levels are invited to turn people’s class rings since they the pool of people allowed to turn class rings is not exclusive to the Junior class alone. The names are meant to be collected and held on-to by the individual gathering the information.

The turning of the class ring is symbolic of a variety of things. The turning of the ring is representative of the end of a cycle. As these Juniors are in the late spring semester of the year, they are preparing for the final year of their pre-college education. It symbolizes the end of a significant part of their lives and the number of times it is turned is specific to the year of their graduation and the year that everything will change. This experience can be backed up by the phrase “coming full circle.”

The people who turn their rings is significant as well. These are the people who have generally held significant roles in the individuals life and have helped shape their character up to this stage of life. Of course, the last person turning the ring is the student them-self as they are acknowledging this change and recognizing the end of their informal education.

The “beanie-Baby” safari was a game my brothers and I played regularly throughout our childhood. Slight alterations have been made in the steps leading up to, during, and after the game has concluded. The child participants of the game will often times dress up in “safari” clothes before beginning the game and the parent will wear a “safari” hat. This game was played exclusively with our father, Kurt A. Gabbard, and it was played as a competition between siblings instead of a team oriented event. After ending the game, our father would assemble a camping tent in our front living room and the children would pile in pillows and blankets along with the stuffed animals before being read a story and being allowed to spend the night in the tent.

I enjoyed this game tremendously when playing with my brothers. We didn’t get to play this game on a regular basis as our father worked a nine-to-five job and often was dis-inclined to play after coming home late in the evening. Getting to play this game was a special activity as it requires a time-consuming set-up/deconstruction.

The St. Joseph figurine is used primarily by Catholic home owners when looking to sell their house. The figurine is buried at the corner of the property and must be buried upside down facing the entrance to the home. The figurine is often sold along with a prayer card which the user must say the prayer on the card after burying the figure and then everyday after until the home is sold.

The Saint. Joseph figurine is a Catholic saint that is known in the religion as the patron saint of workers. Saint Joseph figurines (approximately the size of 3” tall) are sold in St. Joseph home-selling kits and are sometimes even included by realtors along with “for sale” signs and newspaper ads.

The figurine and ritual grew in popularity in the late 1980s and 1990s due to the housing crisis and re-arose in popularity during the 2008 housing crisis as well. People who participate in the ritual claim that their house that had previously been on the market for months or years, sold within weeks or even days after burying the saint.

My family has participated in the St. Joseph figurine ritual in every occasion where we’ve sold our house. My family is Catholic Christian and my father is the main family member who instills our religious traditions and practices. During my lifetime, my family has sold two houses, but moved six times. In both of the times that we’ve sold houses, my father has planted St. Joseph figurines and our properties sold within a month or two of the figurine being buried. My father and mother both believe strongly in the ritual and we have the figurine sitting on our mantle beside our family clock and horseshoe.

For another version of this practice, see:

The Christmas pickle is believed to be a German Christmas tradition but has recently been proven to have originated in the United States sometime around the late nineteenth century. The tradition is for a specific child to win the first gift of Christmas. The gift is usually a smaller preemptive Christmas gift that can usually be shared between children (i.e. a coloring book, or family board game). The tradition was passed down from my Father’s side of the family and our family has participated in the tradition for at least the past twenty four years.

My family has been involved with the tradition ever since my eldest brother’s birth and has evolved with our ages. When we were younger, the pickle was usually on the lower branches of the Christmas tree and was more easily located. As my brothers and I have gotten older, and since my family did not want to abandon the tradition, my parents have begun to hide the pickle more strategically to make the game more difficult to win. In recent years, the pickle has been found in the Christmas tree, in both indoor/outdoor wreaths, outdoor trees/bushes, and hidden within Christmas garland or within our Department 56 Christmas village.

Additionally, the Christmas gift has evolved into more adult items that we would like, for example: a gift card, a DVD, etc. 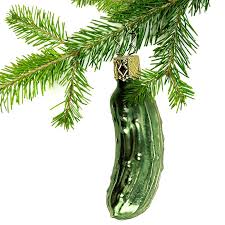 In my family, the Great Pumpkin was used in a similar way with a few alterations. The Great Pumpkin came to take about 1/4 of each of our candy collections each Halloween. My parents made sure that we sacrificed candy that included some of our favorites as well as the candy we didn’t like as much. We didn’t know at the time, but my parents would then take this candy and re-use it in the piñatas for our birthday parties. As a small reward for donating some of our candy, my parents would then leave small gifts for us the next day as if the Great Pumpkin had brought them for us. An example of these gifts might be: a pack pf baseball cards, some barbie clothes, or a small lego set.