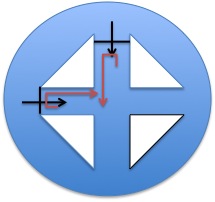 My friend knows someone in a business frat who told her that one of the things they had to do as hazing was spend four hours locked in closet together in complete darkness.  While they waited the members played  the song called Trapped in a Closet on repeat.

My friend found this tradition to be rather simplistic.  She didn’t think that there was any point to this hazing tradition because it wasn’t teaching the hazed individuals any real lesson.  Instead it was just hazing for the purpose of hazing.

I agree with her, the hazing tradition is rather simplistic.  It doesn’t seem to have any purpose except to teach the prospective members to blindly do what they are told.  This is an unhealthy form of hazing because the lack of lesson is degrading and represses individuality.  As a result it reinforces the idea of hazing as cruelty.  This probably furthers the process of hazing from year to year because it will make new members them more likely to inflict this kind of cruelty onto others as their comeuppance for having them done to them.

One of the traditions amongst the USC marching band is to go to the Notre Dame game naked under their uniforms.  Notre Dame is located in Ohio and most of the time it’s about 40 degrees outside during the game.  The marching band does not get cold however because the body heat from everyone around them keeps them warm.

A friend in band told me this tradition.  It is a secret tradition so he is technically not supposed to tell it as he claims the uniforms are considered a valuable item and this tradition is degrading to them

This tradition seems to be making commentary on the lines of decency.  The participants in this tradition are technically within the realm of what would be considered acceptable in terms of exposing themselves but they are still playing with the confines of this rule while also making a statement in regards to disgracing a shared enemy, the Notre Dame team.

One USC marching band tradition that occurs basketball games is that the band will start to scream 57 when the score reaches that number.  Additionally they will taunt any player on the opposing team who has a 22 as the number on their jersey jeering “tweeeenneey twoooo, tweeennneey twoooo”

The informant explained to me that this is a tradition that plays a role in inducting new members into the band.  New members learn this tradition at the first basketball game of the season when the rest of the band starts jeering and screaming they join in.

This is a good example of a tradition based around the liminal period.  The new members are in a place where they are physically in the band, in that they are preforming with them, but they don’t yet know the traditions, so they are not yet psychologically a member of the band.  After the first game however they learn the unofficial rules of being in band and leave the game feeling more a part of the band community.

My friend told me one folk tradition she and her sister used to do as children.  They would sit on the edge of a pond and stick their feet in the shallow water.  After a while the minnows would come by and they would start biting at their feet, removing the dead skin.

We were watching a documentary on sea life and she volunteered this tradition.  She claimed it feels like small pokes and was not painful at all.  She said that the practice was also used by Asian spas, which would stick your feet in buckets of water with minnows in them.

The process seems to be an at home beauty solution which incorporates nature.   It’s much cheaper, although somewhat more inconvenient that buying something to exfoliate your feet for you or paying for a spa visit. It makes sense that this originated as an eastern tradition since eastern medicine is known for incorporating natural remedies.  It is interesting that it was adapted as a practice for children since it is also almost a daredevil game because it places children in a much closer relationship with nature than they would normally be.  Minnows are not inherently dangerous but using them to clean your feet you are mastering nature.

One Greek tradition tells that when you enter a building you should always leave through the same door you entered from.

My roommate is half Greek and she learned this tradition from her mother.  She told me the reason for this tradition was because if you enter from one door and leave through another the string of your life will become tangled.

This is an interesting tradition because it clearly comes from a belief system that is no longer generally accepted by people living in Greece.  The idea that there were strings of our lives is now archaic but the cultural belief lives on, even without the superstitious meaning behind it, showing the power of tradition and the performance of this piece of heritage.

In Greek tradition if you have a bad dream and you tell someone before you eat anything your nightmare will come true.  However the same thing is not true if you have a good dream.  If you tell a good dream before eating in an attempt to make it come true, the gods will see through your trickery and it will not happen.

My roommate is half Greek and she learned this tradition from her mother.

This tradition is interesting because it reaffirms the power of spiritual beings as being above us.  This is humbling in a way and reinforces the idea that mere mortals should never try and outsmart the gods cause they will always be one step ahead.  The tradition is also interesting because it speaks to a very negative aspect of the culture, in this situation no matter what you do, it ends up with nothing good happening.

The tradition seems to also be related to the idea that if you have a wish and you tell it to someone it will not come true, like birthday wishes or wishes on a shooting star.

In Greece it is customary that if you give someone a compliment you must immediately spit on them, making a sound like “p-th p-th”

My roommate is half Greek and she learned this tradition from her mother.  She explained that the spitting is to prevent the compliment from going to their head and inflating their ego.

This is interesting because it promotes a humitity above all else.  This custom illuminates a light on a culture which retains a mentality that people are ordinary and must always remember that.  This seems to be particularly strong in Greek culture where they had a theological system where gods were very similar to humans, they experiences human desires and intereacted with humans on a regular basis.  As a result people were very aware that they were less than gods, who weren’t that special to begin with, leading to a humility and a custom that exists to prevent egos from being inflated.

My friend has some family lore that her aunt tells about when her cousin was 3 she was sitting on a balcony a few stories up and somehow managed to fall off..  My friend’s aunt, the baby’s mother frantically ran downstairs to check on her child, who she expected to be dead, if not seriously injured.  When she came downstairs she found the toddler sitting on the floor.  When the mother asked her daughter what happened she claimed that “a man caught me” but when the mother looked around there was no one around.

My friend told me this story when I prompted her for any legends.  She didn’t seem particularly put off by the uneasiness of the tale, it was simply a story that had ben retold by her family so often it was very ordinary at this point.

This seems to be a  quasi ghost story, with a disappearing savior as opposed to a ghost that explains an unexplainable phenomenon, but still gives an air of unease.  Yes, the stranger hypothetically saved the toddlers life, but why did he not wait to stick around?  If a baby falls from sky and you have the decency to catch it, wouldn’t you also have the decency to return it to its parents? That would be what any normal person would do.  So the ghost in this story is both a savior and a sinister figure.

This story reminded me of a disappearing hitchhiker story that I read, which is similar in that it also tells of a figure, who disappears.  The figure can often provide some form of advice to the other person in the story.  This seems to be a parallel about the phenomenon where people enter and leave our lives very rapidly but cause catalytic change.

In this childrens hand game the goal is to “kill the other player”  Similar to rock paper scissors the game begins with a lead in, (the two players clapping their hands with each other three times) after the third clap the players than make one of three moves.

My friend called this game Zero – Zero – Seven (007) which seems to be a direct reference to James Bond.  I played it too as a kid but not with any specific name.   She said she played this game as a kid and when she was in india she taught it to a girl there.

The game is interesting cause it seems to be a more violent variant of rock paper scissors.  The James Bond reference is interesting as well because it is unclear if that name came later or the popularization of James bond is a terminus post quem.