I was discussing the topic of memes with the informant, so she told me about the popular “awkward penguin” meme theme.

“The awkward penguin meme is just like, I don’t know, people put phrases on it, like extremely awkward situations that happen to them in daily life, you know? And I don’t know, it’s just meant to be funny… With these kind of memes, the animal really like defines it, and I guess like, maybe that it’s a penguin because penguins walk awkwardly, you know? How they walk. So it wouldn’t really work if you put something like a lion, because lions aren’t awkward, they’re just super graceful and awesome, so like, it wouldn’t work, so I think the penguin is very central to the idea”

There have been a lot of customized memes since memes began getting super popular a few years ago, but there’s been a few big meme themes that have been especially popular because of their widespread relevance. The awkward penguin, as explained by my informant above, seems to be one of those enduring meme themes.

Below is an example of a meme created using the awkward penguin template, from an unknown internet author. 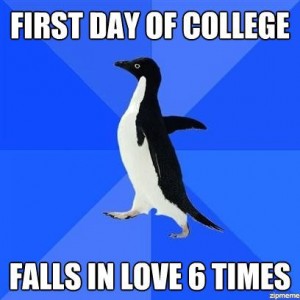