Contextual Data: I had a bit of a cough over Spring Break and so I ended up working my way through a packet of cough drops. One day my mother saw me crumpling one and tossing it aside and she mentioned that when she I was little, she had taught me how to make a doll out of those wrappers. I didn’t remember it, so she explained it to me again. Her step-by-step explanation is paraphrased and illustrated with images below.

1. Fold the paper back and forth into thin strips (“like an accordion,” she explained.) 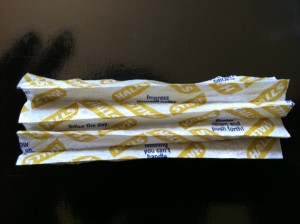 3. Tie a knot in the strip, not quite halfway through it, but offset (about two-thirds of the way down). The resulting shape should be a sort of triangle. 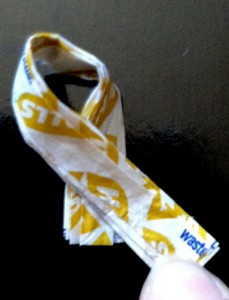 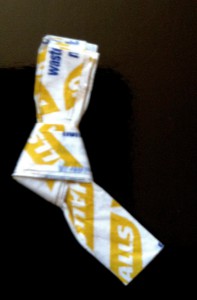 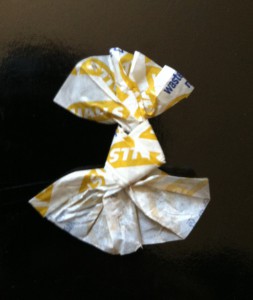 5. Twist the edges of the smaller portion to create two little ponytails. 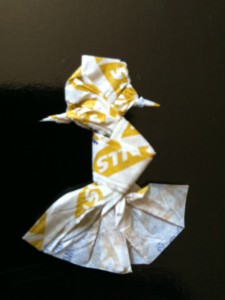 After she finished making the doll, I asked my informant where she first learned about it and why she did it. The following is an exact transcript of her response.

“Uh…In school, when we used to get candy. Uh, we… Like how you guys get muffins when there’s somebody’s birthday—the person brings muffins for the whole class, we used to get hard candies wrapped in that foil. So after we’re done eating with the candy, we would play around with it and that’s what we would end up making… It was just something passed around, I guess. From friends.”

My informant attended school in India. When I asked  if the boys did anything like that with the wrappers, she mentioned that she attended an all-girls school. Overall, there doesn’t seem to be any particular symbolism to the little craft — they never really grew attached to these dolls; they would throw them away after they were done with them and nobody ever collected them or anything like that (possibly because they were so common and easy to make, and therefore not anything rare or exciting). In general, this therefore just seems like a fun little way that friends played with one another, and it just kind of conjured up everyday memories from my informent’s childhood school days.