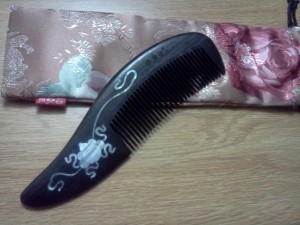 Informant: “There’s this special brush, or comb I guess is more accurate, that girls get when they graduate high school, or any sort of graduation beyond that, although I think is mostly for high school. But the comb is supposed to be meaningful and it’s made out of this special wood, and you’re not supposed to like, get any water on it.

Informant: “I do. And yeah, the wood’s supposed to be good for hair and you can stroke your hair with it however many times and it makes it healthier, I think.

Informant: “My mom’s cousin. She said she got one from her mom, and it’s all about womanhood and all that blah blah blah.”

Me: “Who typically gives the comb?”

Me: “Do you think you’ll get one when you graduate college too?”

It’s interesting that the comb is given to girls at graduation, and my informant stressed the fact that this is an upper education graduation gift. Yet at the same time, she mentioned how it was relevant to womanhood, and indeed it can seem like an appropriate gift to a girl who is transitioning into becoming a woman. Traditionally, I would have assumed that this process would be celebrated earlier, but since it is education-based, this custom would evidently be a more modern one, even if the item itself is older.

My informant also remarked that it’s typically a high school graduation gift, indicating again that it is part of the shift from living with one’s parents and being a girl to living elsewhere in the world and becoming an adult.

My informant didn’t know the name of the special wood used, but her gift is presumably aChangzhoucomb, which can be made out of mahogany, jujube wood, heather, and boxwood.Changzhoucombs have been in production for over 2000 years and have been traditionally used only by royalty, making them a popular and valuable award or present to anyone who may deserve it. Additionally, though the combs can be good for the hair, they seem to be mostly decorative in purpose. They are hand-painted and can often be very intricate, emphasizing the importance of beauty in a young woman.

I’m not sure how popular throughout Chinese culture it may be to give these combs as graduation presents, but no doubt they will be in use for a long, long time, bestowed as various gifts for any occasions.