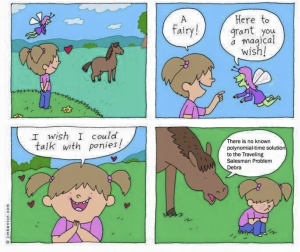 My friend Adam found this while he was taking a break from working on an assignment. He began hysterically laughing at his computer and I looked at him mystified. It took a few moments for him to control his laughter. Then he showed me his computer screen with this picture on it. I too found this image incredibly funny. After I finished laughing I was curious to see why he thought the image was funny. He told me that he thought the image reflected the irony found in the computer science major lifestyle. Often, when working on assignments programmers find something that seems like it will be a blessing. For example, solving an error or finding a helpful example or explanation of a concept online. While this helps for a little while another problem often arises very closely after this first problem is solved. I thought this image was funny for another reason. As a computer science major, we often don’t talk about much else than computer science. When we try to talk about other things we often digress back to talking about some sort of computer science topic. In the image the little girl experiences a similar situation with the pony.  Her reaction in the last frame is very similar to my reaction when I realize that we have digressed back to a computer science topic.

Adam is a computer science and business administration major with a cybersecurity minor. As part of the computer science community he collects and forwards a myriad of folklore specific to this unique group. Computer science folklore is unique and reflects the beliefs and the culture of the group. Per my informant, as well as personal experience, computer science majors have a unique sense of humor that develops from the difficult coursework, the long hours spent on the computer coding, and the group dynamic required to get through the major. This humor is often expressed through memes and jokes only members of this group can understand and appreciate.