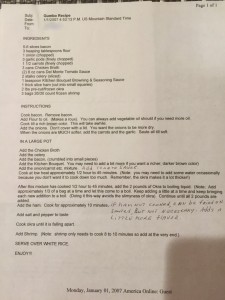 Photo of gumbo recipe that my dad, Brad Perrin, emailed to himself.

When asking my dad if he had any family recipes or ritualistic traditions in his family, he brought my sister and I together and revealed this gumbo recipe to us and wanted to make sure we had copies of it so we could teach our kids about it someday. My dad first learned this recipe from his mother when he was in his late teens. He didn’t have any female siblings, so it was his responsibility to ensure this family gumbo recipe survived. His mother was an amazing cook and loved cooking Southern dishes for their family, with this gumbo dish being made on special occasions such as birthdays and holidays. My dad was excited to learn this recipe from his mom when he was in his late teens because it meant him being fully connected with his roots and being able to pass on the recipe which has been in my family for supposedly at least five generations. He said it was supposedly created by my great great grandma in Algiers, Louisiana.

I loved knowing that I am now responsible for carrying on the tradition, as my family doesn’t have many cultural traditions. It makes me feel closer to my ancestors and also allows me to learn more about Southern culture which formed the basis of my family’s identity for many generations.