Informant grew up and lives in a town neighboring Portland, OR. He now often travels for work, but has and continues to spend time in the titled city when possible. He has a degree in architecture and currently works as a surveyor’s assistant. He likes British television shows, reading, and exploring Portland’s restaurants.

There exists a thing called The Green Man of Portland. It is in the Old Town area, and you can buy paraphernalia of the guy.

The informant previously thought it was like the area’s own private bigfoot and never knew the full details, but the idea is that you perpetuate it yourself.

The informant recalls, “My personal story is that I came to this spot, having not known about the whole Green Man thing for quite some time, and followed the circuit telling the whole story of the Green Man down 5th and 6th Avenue. And then participated in an even smaller tradition of getting a small Green Man knick-knack and hiding it in the area so that someone later can ‘discover,’ or have a sighting of the green man.”

“You can get ‘I have seen the green man’ items, or little sculptures you can hide so others can find the green man around Portland. I have hidden one. I don’t know if someone found it, but I have to imagine they did since it was still in downtown – that’s part of the charm, a self-fulfilling prophecy. Leave a memento not to be found by you, and pass it off to somebody else.”

The informant has not since found a green man that others have hidden.

After checking up on the story, the informant found this description:

The legend goes like this: ever since Portland’s founding there have been sightings of small green archers. Whenever the archer hits someone her vision changes: flowers grow from the heads of passerby, a building called “The Greenwood” appears where there was no building before, and a giant tree towers over the city. On certain nights a great white celestial stag is spied in the skies over Portland. The piece has two components. There are two sculpture and eight “story markers” told as a poem over ten blocks of Old Town and Chinatown. The images in the panels combine the visual language of seventies horror comics and WPA posters. Pedestrians and riders come upon the story in fragments based on their routes through the neighborhood. The neighborhood has a layered, rich history. The legend encompasses all the varied, transitory communities that call that neighborhood home.

And here is a picture of the Green Man sculpture that the informant went to see: 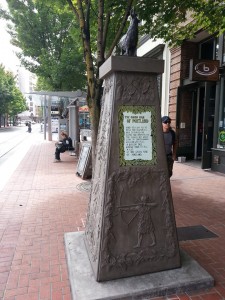 Upon further investigation, this shows to be a piece of fakelore – the conception of the story and the placing of the markers downtown is somewhat recent and by a particular artist. But it is working its way into the local folklore – the markers are becoming places of interest, and there is a built tradition of a form of hide-and-maybe-seek (with these objects) that visitors can participate in. Based on the kind of community that exists in Portland, I’m guessing there are already people who like to believe in the story at least a little bit. It fits in well with the eco-conscious attitude of the area.