“There is a lot of animal folklore in Nigeria. I used to hear this one story all the time when I was little. It goes like this:

There was once a great drought in all the land. So the animals gathered to try and make a plan. It was decided that the tortoise, due to his charm and manner of speaking, would fly up to heaven with the birds in order to bring food down. As he flew, he told the birds that at such times it is important to change your name. So he told them his name was “all of you.” They got to heaven (and the feast) and God said the food was for “all of you.” The tortoise gorged himself. The birds got mad and left, but the tortoise begged them to tell his wife to put soft things by his house so that he could jump and fall from heaven safely. The birds told his wife the opposite and the tortoise jumped and broke his shell.

I’ve heard that one a million times. There are many Nigerian folktales about the cunning tortoise.” 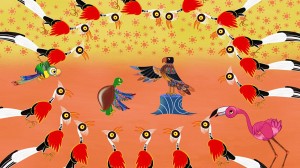 This story reminds me of many tales that revolve around how an animal or other natural phenomenon came to be. It is a way of explaining the world around us before science or other explanations came about to replace tales. The cunning tortoise is a recurring character in Nigerian folklore, representing craftiness and outsmarting others, often at his own expense.