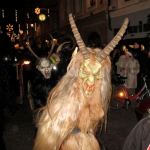 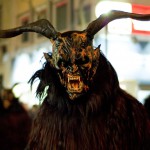 Krampusnacht (Krampus Night) occurs on December 5th in alpine countries in Europe (primarily Germany and Austria). It occurs on the night before St. Nicholas Day which is a festival in which children are given presents by St. Nicholas.

St. Nicholas (as well as the Dutch Sinterklaas) is where the British figure of Father Christmas and the American Santa Claus was derived from. On St. Nicholas day which in most countries falls on December 6th, he brings presents to all the good children. His demon counterpart, the Krampus acts as his servant and while St. Nicholas rewards the good children with treats, Krampus punishes the wicked.

Young men make Krampus costumes that mimic the imagery of the demonic figure. They wear these costumes on Krampusnacht and roam the streets making loud noises with bells and rusty chains and cause mischief around the city. In some towns there are processions and parades where those who have made Krampus costumes can walk down the street making loud noises and spooking spectators. According to the mythos, the Krampus is said to appear the night before St. Nicholas Day and so this celebration acts as a reenactment of this.

” Krampus night is celebrated on the 5th of December. And on the 5th of December people celebrate Krampus day by making home made fur suits, they look like monkey fur but they are actually made out of sheep wool, and then they make hand made carved masks and uhh, the hand carved mask portrays a demon. After they make these, on December 5th, they run around and cause havoc usually in large groups. It goes from hitting people with bitch sticks, to now they have large parades, but ya know usually they get a little rowdy and break stuff—but it’s not really about breaking stuff, it’s more about causing mischief, so it’s a day of mischief and romping around and all that sort of stuff. It only really—the celebration really only exists in rural towns in the mountains of Germany and Austria.”