Context: The informant is a grandmother of 8 whose parents were originally from Afghanistan but settled in Pakistan. She also lived in Saudi Arabia for many years and has a working knowledge of Farsi, Arabic, and Punjabi along with her native Urdu. The following nursery rhyme is one in Farsi that she and her siblings learned from their mother when they were very young, but that few of their children (and subsequently grandchildren) learned in their turn. 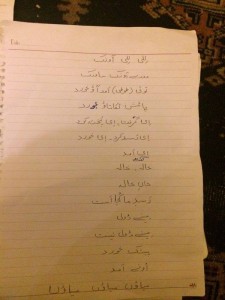 [note: This translation was not a line-by-line rendering; rather, the informant gave a general idea of what the little narrative was about, in Urdu. The conversation was then translated into English, which is what appears below.]

Inf.: There was a auzak, you know, like how do you say?

Inf.: No, not a pool–but anyway, there was–and you know how at the edge of the water that greenish chip-chip [sticky] stuff that grows you know? Around the auzak that slippery stuff was growing and a murgha [rooster*] came to drink water, and his foot slipped on the green stuff, so, he fell in and drowned. One got him, one cooked him, one served him on the table, one ate him; and the fifth came and said, khala (mother’s sister=aunt), where is my piece? And she said, It’s in the doli (pot). And he said, No it’s not. And she said, Then the cat must’ve eaten it. And he says, the cat’s not here, there’s no trace of the cat, and she said, No look, here he comes going “meow meow meow”.

*[note: in the transliteration above, both murgha (rooster) and tutti (parrot) are mentioned; in the audio, the informant almost says tutti but says murghe instead; and in the written text, only tutti is mentioned, but spelled two different ways.]

Analysis: This nursery rhyme is one of the only ones that is somewhat familiar to the informant’s children, who are all Urdu-speaking themselves, not Farsi-speaking. It is relatively easy to remember because so much of it rhymes and many of the words are the same in Farsi and Urdu (like rooster, parrot, foot, pot, aunt, etc.). Like many nursery rhymes with a physical component, this one in particular may be popular with young children because an integral part of the performance is the physical contact and the subsequent connection established between the parent (or other beloved adult) and the child, who relishes the special attention. The tickle at the end especially is eagerly waited and enjoyed, because the child and the adult both know it’s coming, and the slow buildup to it is part of the appeal.

As for the content, it seems to be a common occurrence in nursery rhymes, both Western and otherwise, for animals or even people to be violently injured or killed, and/or cooked and eaten (for instance, Sing a Song of Sixpence). The cat taking the blame for the boy’s missing share is an interesting element: the aunt (and other family members, of course) have eaten their find and left none for the boy, who immediately notices and outright asks the aunt, who outright lies to him and redirects his attention elsewhere. Both are quite aware of what the other is up to, but engage in this playful banter anyway. I think this may exhibit and model a joking relationship between aunts and their sisters’ kids, or more generally, between children and their parents’ siblings that is also present in real life. In the informant’s family, for instance, her youngest sister is only a few years older than the informant’s oldest daughter, and so the aunt and niece maintain a very casual, joking, teasing (but still respectful) relationship.