The informant, S, is 18 years old and from Miami, Florida, but he grew up in Cartagena, Colombia (Northern, Columbia). His mom is from Barranquilla, Columbia (Northern Columbia), while his dad is from Cartagena, Columbia. He considers himself a Latino Columbian and is majoring in Civil Engineering Building Science.

S- “Ok so my Colombian culture has a lot of folklore, um primarily food. One of the main dishes is called Bandeja Paisa. It’s uh in my opinion a very good dish.”

What does it consist of?

S-“It consists of usually white rice and egg on top the rice. You have your steak and then you have an arepa, which is like a flour and corn thing. And usually we have chicharron (pork rinds) on the side and the dish usually also has patacones, which are also known as tostones (fried plantain slices)”

When do usually eat it?

Does your family make it?

S-“Yea my mom makes it all the time, but we go out to eat it from like the different Columbian restaurants from Miami, where I’m from”

Would you say each family has its own different recipe or it’s the same everywhere you go?

S-“Just like any recipe it can be tweaked here and there. Like for example the steak can be either carne asada (steak) or carne molida (ground beef), so it’s two different kinds of steak. And some people don’t like having the arepa on the side. It depends on the time when you have it. For example if you’re having it for brunch then you’d have the arepa and if you’re eating it more towards dinner then you wouldn’t have the arepa present on the dish”

Are there any other sides that go with it?

Analysis- The dish consists of many of the local and plentiful types of food that are present in the area and in the country. It is also evidence of the impact different cultures have left there over time, mainly from the conquistadors from Spain, France, and Britain. The name also is part of the country as it consists of the area it originated from (Paisa) and its appearance of a bandeja (large pot or bowl). While there may not be one official authentic bandeja paisa, due to the fact that it can be tweaked and no one can for sure know which is the original recipe, the people don’t seem to mind this, for they even go out their ways to try it at different places. 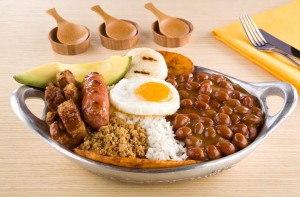 Information about the Informant

My informant is an undergraduate student majoring in Philosophy at the University of Southern California. He is half-Columbian and was raised in the Jehovah’s Witnesses Christian denomination.

“It’s called, um, ‘El Mano Peluda [sic?],’ and that’s supposed to mean ‘The Hairy Hand.’ And, um, I think that was so I wouldn’t get up at night, or, like, move around or make too much noise. But basically, um, when you’re sleeping, this hairy hand would come in through the windows or through the vents or something.”

“It’s just a hairy hand. That’s it. Um, and I actually Googled it. Apparently, it’s some guy had his hand cut off during the Inquisition and he revenged–he said he would get revenge on the people who were the culture that killed him. So, um, the hand would come out of its grave and it would grab children or it would grab their legs from either under the bed or it would crawl up their blanket. It was just really scary. Um, and yeah, occasionally my mom would  use it as kind of like a, um, you know when you rile up little kids, you say something like ‘The hand’s coming, the hand’s coming,’ and she’d grab my leg and I’d go like, ‘Oh my god!'”

This, unlike the other stories this informant told me, does not seem to be a case where the parent scares the child in order to get them to behave, but is more of a ghost story with purpose of entertaining/scaring rather than coercing. This story does give the figure in it a backstory, according to my informant’s research, which also supports its position as more of a ghost story than a story to get children to behave with. The strange part of this is the commonality of the concept of a “hairy hand,” with disembodied hand stories all over the world constantly needing the hand to also be hairy. This is possibly a remnant of the historical theory that criminals were closer to our purported ape ancestors and thus displayed features that are more akin to those of primates, including excessive body hair.

For another “hairy hand” story, see:

Gilbert, Jane . “Letterboxing on Dartmoor: An Addictive Pastime… for the Brave!”. Time Travel-Britain. Web. 01 May. 2014. <http://www.timetravel-britain.com/articles/country/dartmoor.shtml>.