M: This is Tanks, at least that’s what I’ve always heard it as.  Um, we have two different control schemes that we’ve played with.  He used to do an actual flick to move it*, um, I never did.  Mine was always just pressure.  And then you just see if you can- the danger is actually stabbing the other person the pen, but you set it up at the end of the triangle, and then the- your tank moves to wherever, um, so you see that tank only moved a little bit.  (Gestures towards recent opponent move) So the goal of this is to actually eliminate your- the- all of your opponent’s tanks.

Each player draws three triangles at either end of a sheet of paper pointing towards the opposite end; the paper should be fairly large like loose-leaf or computer paper.  The players take turns placing a pen at the tip of one of their drawn triangles and by either flicking the point or applying significant pressure draws a line from that point.  Regardless of the orientation of the line, the new tank is drawn facing the opposite end of the paper.  The tank’s new position is drawn at the end of the line.  To eliminate an opponent’s tank, your line must solidly touch the other person’s tank; eliminated tanks are crossed through with an X.  Whoever eliminates all of the opposing tanks first wins.  Please see the reference images below.

This game was collecting while hanging out with a group of friends from the University of Southern California and we all began to talk about different games from our childhoods.  The primary informant, ‘M’, provided the brief description above as he was playing it with another informant who also gave his experience with this game.  The summary of the game rules was written using the explanation given and my observations as the game occurred.  The primary informant stated how he learned this game in elementary school while living in Okinawa, specifying that he attended school with both Japanese and other American students.  He also stated that this game was something he did during camps with his friends as well.  The informant playing against him grew up in San Diego and learned this game from his dad when he was four years old.  He mentioned how he was surprised that others knew this game because he thought it was just a game among Asians since his dad never fully assimilated into American society.

A quick search online yielded dozens of variations on this game, including, but not limited to, playing with planes or rockets instead of tanks, drawing a map that players must navigate around while also trying to destroy their opponents’ tanks, or destroying the tanks by means of gunshots as opposed to running directly into them.  Even with the two players above, they knew two different ways to complete their move: flicking the tip of the pen as it is standing or applying pressure until the pen slips from underneath itself.  I believe the drastic variations in the game and the spread in geographic location where this game is learned is due to a number of different reasons.  As a start, pen and paper games are easily accessible because of the simplicity of materials.  They travel easily and the game is easy to teach because the materials are familiar to most and do not need to be transported.  Tanks has no cultural or language dependencies, allowing it to be shared across cultures and potentially even cultivate cross-cultural relationships.  There is not a large learning or knowledge curve to overcome before the game can be enjoyed, either.  Lastly, as evidenced by how the opponent from the game above learned it from his father, there are no age limitations to this game.  The gameplay does not necessarily become boring or childish; younger kids may enjoy being able to flick pens around and destroy tanks, while adults may find simple pleasure in strategizing how to make a move or entertainment in playing.  Thus, it is easily passed down between generations and easily perpetuated over time.  All of these factors in the gameplay of tanks lend to how easily it can be modified and how easily it is shared among people.  Tanks is easily accessible by people from a variety of different cultural and personal backgrounds, and thus it can foster interpersonal connectedness wherever it travels through the shared enjoyment of a simple pen and paper game. 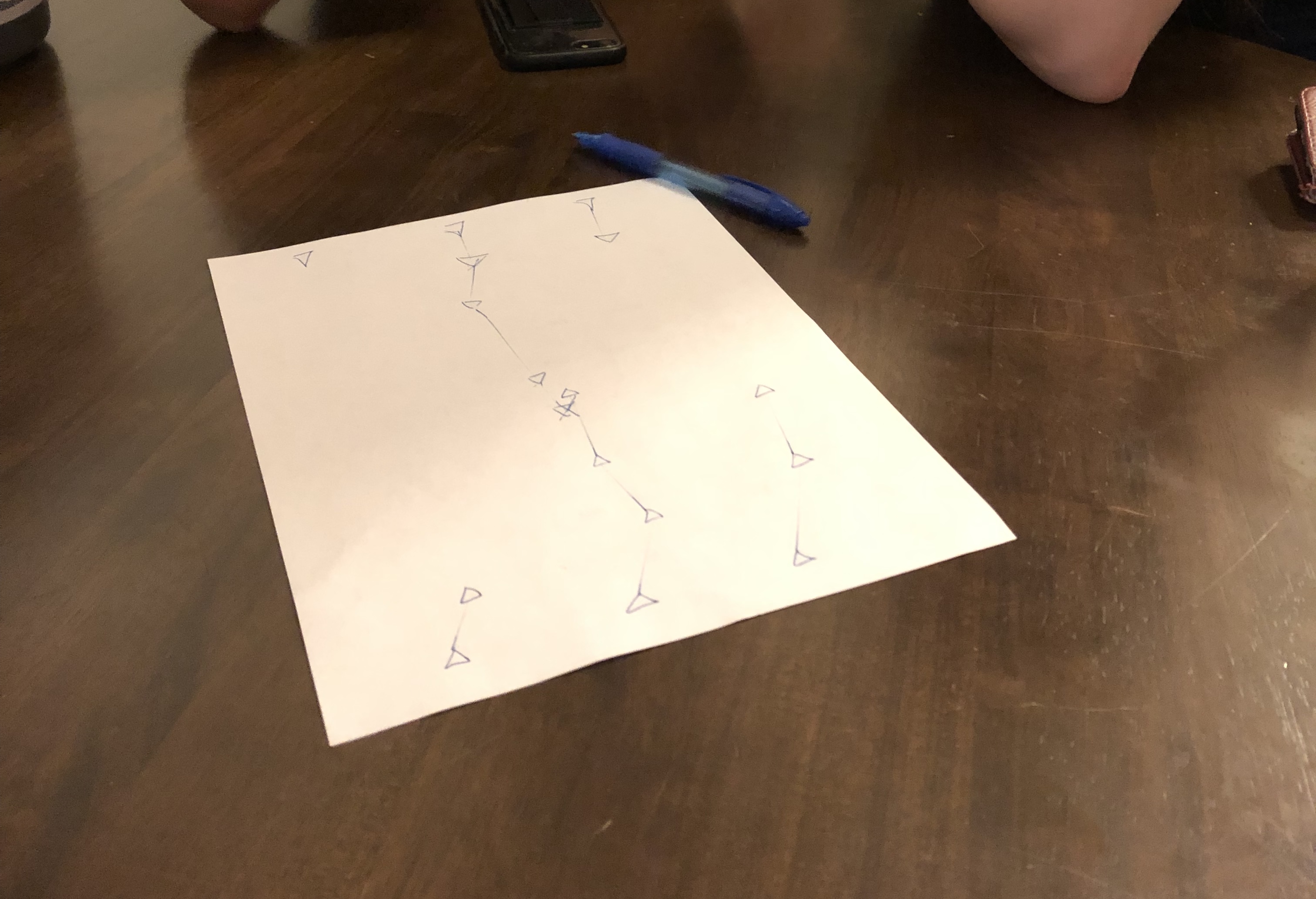 The tanks game board, where each player starts with three triangles at their end of the paper.  You can see the drawn lines from each tank for the moves made, and how a tank is destroyed in the center because the opponent’s line crossed through it. 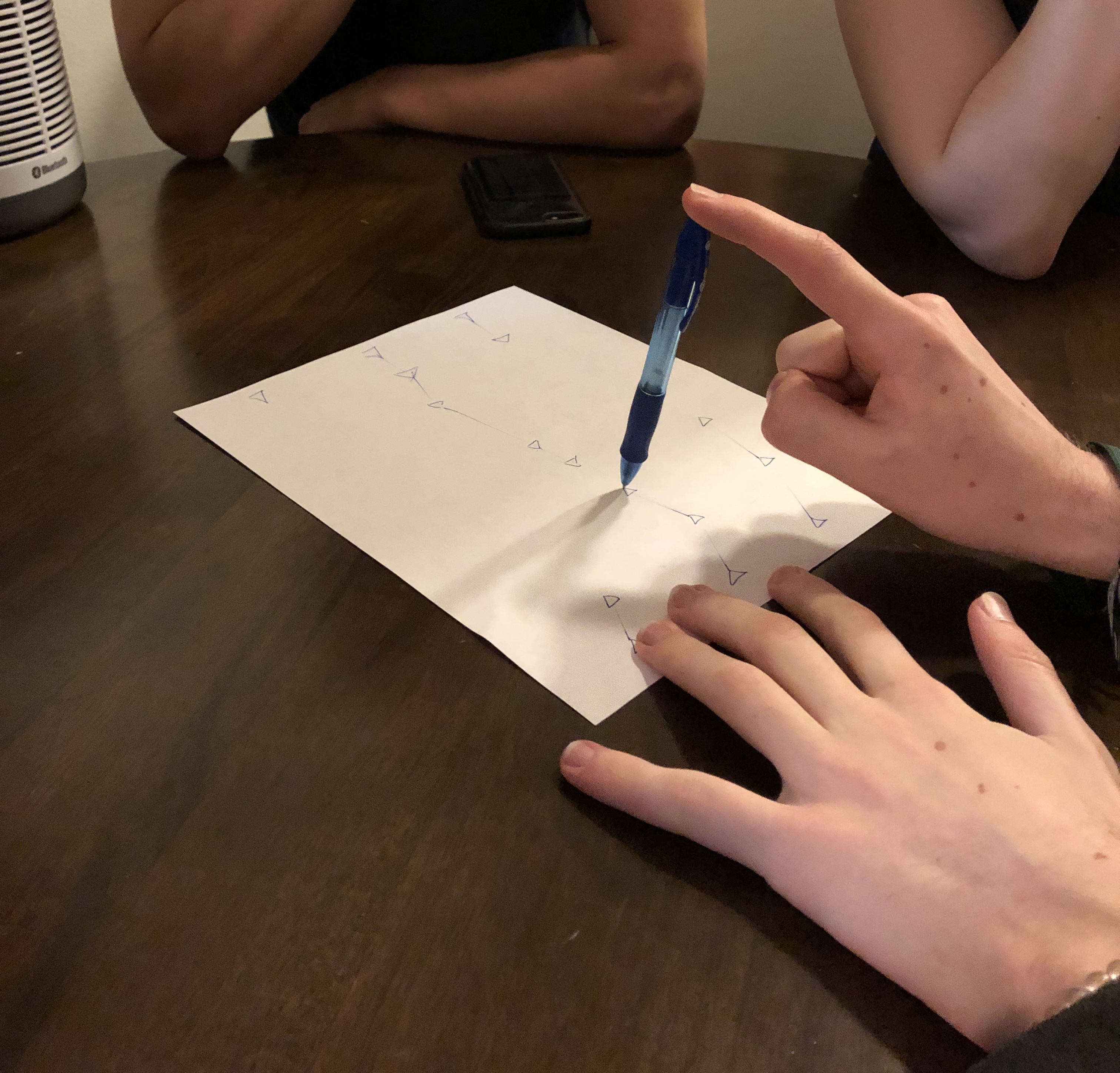 An example of the gameplay in tanks.  This player is making his moves by applying pressure to the pen until it buckles from underneath itself, making a line on the paper as it does so.

The following information was collected from a seven-year-old Caucasian girl from South Haven, MI. The girl will hereafter be referred to as the “Informant”, and I the “Collector”.

Informant: “Daddy sometimes will draw pigs on our hands when we are sleeping.”

Collector: “What does it mean?”

Informant: “Um…haha…I don’t know. It’s funny because we don’t know who did it.”

Collector: “Does he do it to you and your sisters?”

Informant: “Yeah haha…He will draw it on my hand and then on my sister’s hand. And we wake up and he pretends he didn’t do it…Umm haha… But we know he drawed it.”

The Informant picked this up from her father. He would draw pigs on the Informant and the Informant’s sisters’ hands when they were sleeping. Then they would wake up with a drawing on their hand he would pretend he hadn’t done it. It became a game of who could find him and get him to admit he drew it first. The pig looks like a smaller circle inside a larger one, with two ears, four legs and a tail. It is the same drawing every time. The Informant remembers because she finds it funny and enjoys playing.

I found this piece to be very intriguing. I understood it to be a sweet little game played between a father and his young daughters. But while searching for a deeper meaning, I’ve come to another conclusion, one that is hardly obvious to a seven-year-old. I believe this game to be a way a parent can make a child feel like he or she is always watched over and cared for, even in sleep. It reminds me of the childhood comfort of falling asleep on the couch, only to awake in your own bed, tucked in and warm. I imagine that waking up with this drawing on your hand, a sign that someone who loves you is with you even when you are unaware of it, would be a huge comfort and affirmation of the love that you feel from that parent.

Context: The informant is an 11-year-old resident of Southern California, of Indo-Pakistani descent. She lives with two older siblings, parents, and grandparents and attends a public middle school in the South Bay area. She has close friends of many different religious and ethnic backgrounds, and the following narrative sequence is one she learned from one of these friends while she was still in elementary school.

Analysis: The informant says she learned it only a couple years ago and remembered it because she “thought it was cool” and “kind of funny”. The informant relates that she enjoys many types of art, including drawing and painting, and often is in charge of making signs for events among her friend group, like yard sales and party invitations. So the personal appeal to a young artist or craftsperson is obvious.

I think the general appeal here is similar: the fact that with a few simple drawings and letters, an entire story can be told with little effort. The idea that there are just enough fingers on a person’s hand to write “T-H-I-S” on the knuckles, and then fold different fingers to show different words, must be appealing to kids who are just starting to appreciate the difficulties of both language and tactile crafts such as beading, painting, or cursive handwriting. The simple story is also humorous and a common enough occurrence: trying to save a little bug only to find that you unfortunately don’t know your own strength; or simply the humor of seeing something that causes many small children, especially girls, some anxiety–“creepy crawlies”–being put out in such a messy and unceremonious manner helps them cope with those anxieties indirectly while not being called out as a “scaredy cat” or a “sissy”.