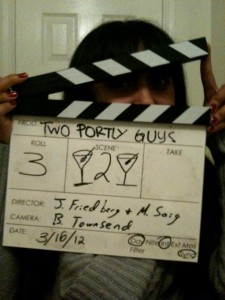 My informant is a female USC film student who is studying to become a director of photography (or DP: the crew member on a film set responsible for lighting scenes and composing shots with the camera). She started learning set procedure and lingo even before taking film classes at USC by volunteering to help out on student sets. Today she is well-versed in set terminology and, as a senior film student, enjoys teaching younger students set protocol.

On this set of a USC student project,  my informant worked as the 1st A/C (first assistant cameraman – assistant to the camera operator). At one point she asked a freshman production assistant (or PA:  a person who can help any department on the set with small tasks, such as running errands) to give her the “C47” she had clipped to her sweater. The PA was unsure what my informant meant, so my informant pointed to the clothes-pin clipped to the PA’s sweater. She then gave the following explanation.

Informant: Uh, it was a term that was developed back in the day. On equipment lists of stuff, it was listed under C47, so they called them C47s.

Me: And what is it that you’re holding?

There are several variations on the story my informant told about the term “C47” for a clothes pin. Generally the story involves an official equipment order form, as my informant described, on which the order code for clothes pins was C47. Another version of the story I’ve heard plays on the common stereotype of frugal movie studio executives, and tells that when executives saw equipment listed on order forms that they could not divine the purpose of, they would deny the order. So when reporting equipment orders to the executives, DPs would list C47 instead of clothes pins because the number made the item look like important equipment.

Clothes pins are an item found on film sets that it may be hard to think of a purpose for, but they are in fact very helpful. Wooden clothes pins are what the lighting crew use to clip colored filters (called gels) onto lights to give the light a particular hue.

Film sets are full of strange terms for common objects. The legend about C47s justifies the terms with a simple explanation that basically amounts to: that’s just what we call them. More important than the story about the origin of the term however is the use of the story. The story is never told to a seasoned crew member on a set, it is always brought up in the context of explaining the term to a newcomer, like the freshman production assistant in this instance. Learning terms like C47 and the stories behind them is part of the process of learning set protocol. Once you know the terms, you become an accepted part of the crew, and often this basic knowledge allows a crew member to move up from production assistant to grip (crew member in the lighting department), and beyond in climbing the ladder of crew positions.

My informant attends the University of Southern California School of Cinematic Arts’ film production program. She is primarily focused on camera and lighting work and works often as a director of photography (crew member in charge of lighting scenes and composing shots in the camera). On a recent student film set she told the following joke while waiting for the director to finish rehearsing with an actor. The camera was already set and ready to go, and she reflected that it was a good thing that on this project they didn’t need to worry about recording sound.

After telling the joke the informant told a brief anecdote about a set experience she had where the assistant director (set manager) needed to find the production mixer (crew member who records sound on the set) in order to shoot a shot because in between shots the production mixer had fallen asleep and was not responding to calls. The informant herself took the joke as a humorous comment on the fact that the sound department has a lot of down time on sets. Like the actors, they are really only needed just before and through the recording of takes. Much of the rest of the time spent on a set changing lighting and re-dressing set pieces is time during which the sound department has nothing to do which gives them, according to my informant, the appearance of having an easy job and being lazy workers.

My reading of this joke however is more focused on the gender and position of power of the subjects in the joke. The main character in the joke is an actress who is portrayed as naive and desperate for fame. The joke plays upon a general belief that sex will help one, especially a woman with little experience, to get ahead in the film industry. The joke assumes a “green-ness” to actresses in Hollywood. The laugh comes from the understanding by film crews of  the truth behind the statement that “everyone’s always saying, fuck sound” and that newcomers to Hollywood would not understand why that is and would misinterpret the meaning. The actress who is new to town can hardly be expected to know the perception of sound technicians with film crews.

Also notice the use of the term sound “guy.” Rarely in the film industry does one refer to a crew member using a female pronoun – often the word “person” is substituted for “guy” or “man” if one is attempting to be politically correct, or even to refer to a female crew member. The gender dynamics of this joke indicate that it is young, naive girls who seek fame and fortune in a male-dominated work environment, where sex appeal is their only power. The desperation of the actress to break into the film business also hints at the brief shelf life of actresses, who seem to age quicker (and lose that sex appeal) in the public eye than male actors. This reveals not so much a gender bias among film workers as a tradition of acceptance of the fact that many roles in the film industry have historically been filled by men – particularly skilled crew roles.

The fact that the gender dynamics of the joke held even when being told by a female director of photography reveals that while the dynamics of film crews and the business itself may change, a stereotypical image of the film industry planted in the 1920s still holds in the public consciousness, and is source of ironic amusement even to modern film workers.