There once was an incredibly lazy man. His wife’s mother got very sick, so she had to leave home for a week to go take care of her. “But who will prepare my food and take care of me?”, the man asked. “I will make you a giant pancake that you can wear as a blanket. That way, you can sit in your chair, with the pancake-blanket to keep you warm. When you get hungry, you can pull up the blanket and take a bite.” When the wife returned home after a week, the husband had starved to death. He had been too lazy to pull up the blanket.

This is an old Chinese story. My informant’s father is Chinese, and her mother is American. Whenever her dad, the primary cook in her parents’ relationship, goes away, he makes her mother a pancake “blanket” as well. It’s a symbol of love and affection from one to the other.

After discussing a few traditions on Easter Day, this informant told me about her own holiday tradition that she started with her family. A few years ago, this informant found a recipe to make Munlie bread men in a magazine. 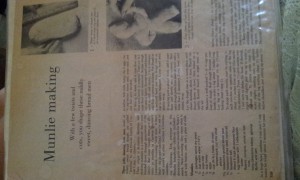 This is the recipe for making a sweet German bread that is shaped into “little men” which is what Munlie or Mannlein is translated into in German. The informant discovered that these “little men” were a German Christmas Eve custom. Children would decorate this bread into little shapes and leave the bread out for Santa, the German version of cookies and milk.

There is actually also a German Children’s song “Das bucklige Männlein”, which translates to “The Hunchbacked Little Man” and this is why the bread men are twisted into outrageous looking shapes. After finding this recipe, my informant started sharing it with her family and now they make them every Christmas without fail. Every Christmas Eve, they make the bread and then Christmas morning, they shape and eat the bread.

This recipe consists of ingredients like lemon peel, honey and anise seed, which gives it the signature sweet flavor. And then to make a Munlie, there are much more specific directions, which were found with the recipe.

“To shape each munlie, start by cutting 3/4-inch notches on opposite sides of the log about 1 1/2 inches from an end (this marks the shoulders). Twist 1 1/2-inch section over 1 full turn to define the head. If desired, pinch and slightly pull the tip to make a pointed cap. To create arms (step 2), make slighty slanting cuts on opposite sides of the log starting about 3 1/2 inches below shoulders and cutting up about 2 3/4 inches (leave about 1/2 to 1 inch across center for chest). For legs, cut from end opposite head, making a slash through middle of the log and up about half of its length. To animate each little man, pull and twist the arms and legs into active positions, making at least 5 twists in each limb (step 3). Keep the limbs well separated for good definition of activity. Space the prancing munlies about 2 inches apart on the baking pan.”

I believe this custom emphasizes the idea of family during a holiday. This is a recipe that allows the children to join in and make the food with their parents and then use their creativity to decorate it after. As with many holidays, Christmas time holds so many unique traditions and just like people make  Gingerbread men and leave cookies and milk out for Santa, this is the German way of celebrating the festivities.

My informant says this about his background:

“My parents are both um…from Mexico… and then they moved to the uh…Sacramento, California in uh ’88 and had my sister and I was born shortly after that in ’91…um…we lived in a mostly Hispanic neighborhood until the time I was in third grade at which point my Dad’s career brought us to a point where we could move into a high income neighborhood elsewhere in Sacramento and I lived there since until I moved to Los Angeles this year for college.”

My informant was raised in a Catholic family. He provided this Hispanic folk food way in the following conversation:

“Informant: So this is a folk food way, it’s interesting because I’ve heard of it outside of my family’s context and outside of the town that I grew up in, but uh…only rarely and never in the same way that I’ve seen with them. Uh…this food way is Chilaquiles, which are a uh… breakfast food in Mexico umm is basically a uh…chopped up tortilla, fried and served with, in uh… via you mix it with eggs umm, sometimes peppers… and then it’s served with really hot salsa on top and on a rare occasion, served with soul scream on top…that, at least in my home, this was a very uh, weekend-y thing because it takes time to prepare, we didn’t really have time for it on a weekday, um, at least for my parents growing up, it was very much, very much a luxury, um, because this has meat in it, you might get meat once a week and eggs were also…not quite as much and so, these ingredients, so…is very very simple. This was uh, uh, quite the, it was uh, a rare deviation from the usual diet, a very luxurious one.

Collector: What do you think is the significance of this uh, food way?

Informant: Uh, the significance is that it’s rarely reflective of the way that, at least the way that people who grew up in that town, um, it’s a very modest upbringing um…you don’t get fancy breakfast like you see in America where traditional breakfasts are pancakes, eggs, bacon, sausage, orange juice…very very simple, but it’s not as appreciated by the children who grew up with that because they don’t recognize the luxury of that sort of breakfast.”

This folk food way is very much reflective of the living standards of what my informant describes as a modest upbringing in a Mexican village. The addition of meat, eggs and soul cream, which are considered expensive food items in a small town like the one my informant’s parents grew up in, show the Chilaquiles’s role as a luxury or celebratory food–it’s a special food, something different from what is usually consumed. I find that many folk food ways are created out of this situation, where a specific food, such as eggs or meat, are main ingredients of a special dish (special as in special occasion) because it was considered a luxury food back in the day.

To show an example, my father often recounted to me about luxury food items in the past.

Here’s a little background on my father:

My father was born as a farmer’s son into a veteran’s family in Taipei, Taiwan. His father and mother ran away from China to Taipei during the Chinese Civil War. Many of his cultural practices and beliefs are taken from mainland Chinese culture. Because of his background, he is considered a “mainlander” in Taiwan (Chinese in Taiwan are divided into Mainland Chinese, Taiwanese or indigenous). My father graduated from Iowa University with an MBA. His B.A was obtained in Taiwan.

While my father often tells me how precious sweet foodstuffs, such as jawbreakers, watermelon and rock candy, were to him in his childhood, he never forgets to reinforce how precious eggs are. He said that in his childhood, eggs were extremely expensive so much so that families couldn’t afford to eat eggs. The only chance he would have to eat an egg was on his birthday. He came from a family of five and on their birthdays, his mother would make ??? (Yang Chun Mien, which directed translated would be “not complicated noodle” or “simple noodle”), which is basically water, noodles and scallions, and put an egg, one egg, in the soup, as a sort of luxury food. Thus, nowadays, when eggs are a lot cheaper, my father never forgets to add egg into the noodles.

From these recollections, we can see how historically rare food items have shaped folk food ways.