While we were in line to order at a local Chipotle restaurant, I asked the informant if any specific traditions or customs related to her South Korean heritage have stood out to her the most throughout her life. She hesitated for a moment, and at first failed to answer my question. A few minutes later, she began to describe a coming-of-age ceremony that was held for her as a baby.

“Traditionally in South Korea, when a baby makes it to 100 days it means that they’re going to live a long life. So at 100 days the baby’s family holds a ‘100 Day Party.’ The babies wear a traditional South Korean outfit and there is a whole feast for the family. During the ceremony there are a lot of different bowls, and each one contains something different like a dollar bill, different types of food, some thread, or a pencil. The baby is set in front of the bowls and whichever ones it puts its hands in are supposed to represent what type of life it will have. So if you choose the pencil you’re supposed to be intelligent, the dollar means you’ll be rich, and the thread means you’ll have a long life.”

This ceremony marks the point at which a South Korean family truly celebrates the life of their new child without hesitation or worries of health complications leading to a premature death. It seems to be a remnant of the lack of healthcare and prevalence of childhood mortality that existed across the globe several centuries ago, since in recent years child mortality rates in developed nations like South Korea and the United States have fallen drastically as a result of increasing knowledge in the health sciences as well as greater availability of medicine and healthcare services. I asked the informant if she remembered what was in the bowl that she picked on her 100 Day Party, but she did not. For the informant’s family, then, the party served more as a celebratory event than a true predictor of their child’s life trajectory, since her lack of knowledge with regards to the object that she picked had no bearing on the personal and career choices she has been allowed to make throughout her life. I also asked the informant if she plans to hold a 100 Day Party for her children, if she has any, and she responded that she does. It is realistic to say that this folk tradition will continue to exist for future generations, as it is a fun and exciting event that many would have no moral hesitation holding for their child. 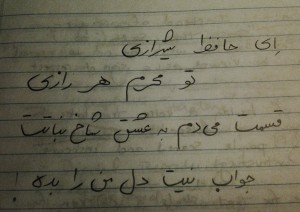 Oh, Hafez from Shiraz, you are the keeper of all secrets. By the devotion that you have to your lover, I beseech you to answer my wish.

Hafez was a Persian poet, and his work has become extremely influential in Persian culture. Although it is authored work, his poems and sayings have become a part of the daily lives of Persian people, becoming almost like folklore. The ways in which his work is now used is particularly striking, and these uses have become folkloric in that they are ritualized and have become traditional. Many Persians will recite the Call to Hafez out loud, express a wish or desire, or even ask a question in their mind, and then open to a random page of poetry in the collection, Odes of Hafez. The performer will then read the poem and interpret its meaning, which they view as an answer or response to the desire or question they expressed. The informant made it very clear that this tradition has existed for several generations, as she remembers her father doing it with his friends when they lived in Iran. Furthermore, she made it very clear that this tradition cannot be distinguished by social or economic status either, and is a tradition practiced by all kinds of people. I found it particularly interesting when the informant insisted that I perform this tradition and ask Hafez a question. After asking a question and opening to a page, the informant became very excited and read the poem aloud, asking if it provided any insight into the question I asked. After stating that I was unsure, I revealed that I asked Hafez if I would be able to find employment after college. According to her analysis of the poem, my future is optimistic. Her excitement at not only performing this tradition herself, but also in sharing it with me, exemplified its role as a social activity, or game, that is fun and entertaining. It also exemplifies that people of all cultures have long tried to predict their futures and fortunes, often through astrology or entertaining traditions like this one.