Spencer, my friend from the George Washington University gave me a talk about a sub-culture of individuals known in America as “Hipsters”.

Spencer: “Hipsters are a stereotype. But they’re a funny stereotype. (laughs) They’re like, people who don’t ever want to be mainstream. They do everything outside of the ‘norm because that’s what’s cool.”

I ask him what he means by things that aren’t “mainstream”.

Spencer: “Well, a ‘Hipster’ is probably not somebody who listens to [music] that’s popular or anything upbeat. They like things that are old, things that are vintage. There’s this video of someone taking notes on a typewriter. Stuff like that.  It’s sort of a label. I mean, they’re a kind of subculture. Hipsters don’t identify as hipsters. It’s kind of an insult, really.”

I asked him why he believed that being labeled a Hipster represented an insult.

Spencer: “Well, It’s sort of a joke. (he laughs) Though some people probably take it seriously”, he continues. “It’s like if you have a friend, and you want to watch a movie together, like Star Wars, but he doesn’t want to see it because it’s too mainstream.” He makes a gesture here with his hands in a faux-suave kind of way. “You’d be all like – Man, you’re such a Hipster!”

He stops to laugh again.

I asked him to describe what he thinks a hipster would look like. 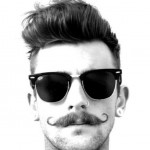 Spencer: “I mean, I live in [Washington] DC, and you see them all the time, or people who look like them [hipsters], I’m not judging. I mean, they’re sort of cool in a retro kind-of way. I like anyone who can do things without caring too much about what other people think of them. (laughs)”

“Hipsters” are a subculture of individuals who live organically and distance themselves from the “mainstream” or “popular” world. As the idea of a Hipster has become something a stereotype, the term is seen by some as derogatory.

Personally, I find the concept of Hipsters to be very interesting. They’re sort of postmodern: rejecting our concept of modernity to substitute their own. Hipsters live an organic lifestyle, though some would argue that it’s mainly reactionary. The word “Hipster” embodies both a label, and a definition. Though many people adjust to the subculture, Spencer and I both agreed that the term has become somewhat patronizing in recent years.