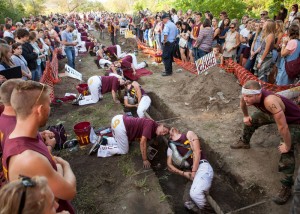 *Note: The informant, Harriet, is my grandma. She attended college at Rutgers University in New Jersey!

INFORMANT: “Well, there were a lot of jokes about the football team, the Scarlet Knights. They weren’t very good. West Virginia had a lot of jokes about us. And then there were the usual jokes about Rutgers kids being stupid, Rutgers kids being idiots. It was all pretty generic, most of the jokes could really be applied to anyone or anything. But one of my favorites was the one about the cemetery. It was … there was … a little boy and his mother were walking through a cemetery and they passed a tombstone that said ‘Here Lies a Rutgers Graduate and a Great Man.’ And the kid looks confused and he says to his mom, ‘I don’t get it,’ and she asks ‘Why not?’ And he asks, ‘Why are there two people buried here?'”

While the cemetery joke was pretty general, Rutgers jokes are a good example of the wider category of sports or college rivalry-related jokes. Almost every college has a direct rivalry with other colleges, whether it’s based on sports, academics, or something else entirely. With this competition always comes a slew of jokes, often very basic and general, that demean the other team, emphasize their shortcomings and failures, and downplay their triumphs. These jokes build on the lore of each particular school, strengthening bonds between its students and alumni, and enriching campus culture.

Generic jokes, I suppose, are also a form of folklore all their own, because they are blank slates to which any number of things can be applied. They aren’t specific enough to be blason populaire, but rather they’re so general that they can be used as a quick put-down for virtually anything.

My informant is a 47 year old psychotherapist from Hermosillo, Sonora, in northern Mexico, who currently resides in Mexico City with his wife (my aunt) and two young sons. He told this joke at a family meal in Mexico, during a very long exchange of jokes among family members.

“A dude from Nabojoa is at the supermarket like that crawling on the floor all like this” (lowers down) “and then he’s in the supermarket there and he finds himself with a dude from Guaymas, and who tells him ‘and what are you doing man’ ‘well I’m just here looking for the lowest prices!’ It’s regionalism, the people from Guaymas and Hermosillo feel like they’re superior to those from Nabojoa.”

“Where did you hear it?”

“In the baseball stadium, at a game between the Hermosillo Naranjeros and the Nabojoa Mayos.”

I have another take on this joke from my informant’s son, who knows a different version where the guy on the floor is just a son and the guy asking him what he’s doing is a mom instead. I think it makes sense that the younger boy knew this version because of what it has to do with being young and misunderstanding things. His father, on the other hand, associates the joke with a rivalry between his hometown and another Sonoran town, especially since he heard it at a baseball game between his hometown team and the opposing team. So while his son uses the joke to play on his identity as a young person and a son, his father uses it to play on his identity as a person from Hermosillo.

How come the Bruins haven’t dumped ice on their coach this century?

Because the guy who knew the recipe graduated.

Barry informed me that he first learned this joke while he was a student in high school.  His father and mother are University of Southern California alums so they raised Barry to be a USC football fan.  The background for the joke is that UCLA and USC have a heated rivalry in sports and academics, as both schools are located in the greater Los Angeles area and are very similar.  Also, the ice being alluded to in this joke represents the ritual that football players will douse their coach with the ice and water that is found in their coolers.  Barry explained that the joke just symbolized the intense competition between the Trojans of USC and the Bruins of UCLA.

While this joke may not represent an entire country or regions ideas, it is still considered folklore as the folk in this case are USC students, alums, faculty, and fans in general.  Sports teams are usually followed by a large group of people who bleed their teams colors and share a large hatred for their teams rivals.  This same hatred between two groups is seen across many different groups and helps bind them together to create their own folklore.  Some other examples may be rival countries, states, gangs, religious groups, and many other groups as well.