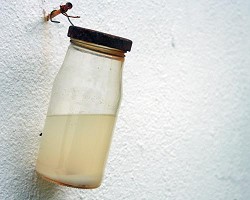 We have this jar—like this little flash of shark oil at home—and what we think is that when it goes cloudy it means a hurricane is on its way. And for the most part, yeah, hurricanes always come when that jar gets cloudy.

Rebecca comes from Bermuda, a British overseas territory located in the North Atlantic Ocean. Hurricanes pose a large threat to the inhabitants of the island, thus it is important to be able to predict their arrival in order to prepare. Rebecca’s family is not the only one to use shark oil to predict the weather. “Many families have a jar in their cabinet somewhere. It’s not just me.”

As to why shark oil in particular is necessary in the prediction of hurricanes, Rebecca is unsure. According to her it is a common belief that has been around for a long time. More important, its success rate is extremely high. Rebecca can cite countless times when the cloudy shark oil was followed by a storm. It is a belief that she grew up with. The shark oil has been in her kitchen since she was a little girl and she always associated it with hurricanes.

There are a number of reasons why I think the shark oil could be an integral part of the prediction process. Sharks are very high on the food chain, and, therefore, capturing one, especially in a time before large fishing boats, would be a tremendous feat. It would be equivalent to capturing and killing a full-grown lion with your bare hands. As a “king” of the ocean, the shark’s oil could act almost as a divine serum that potentially could harness a supernatural power (in the eyes of an indigenous population).  It certainly is a very different way of predicting the weather, but many maritime cultures have sea-based beliefs as to what will signal the coming of inclement weather.

I have heard of animals being able to predict the coming of storms—dogs often grow restless under the approaching shadow of a storm—but never have I encountered the use of parts of a dead animal to predict the weather.

My informant told me about an old Irish superstition he knew:

“When you yawn, make the sign of the cross over your mouth to keep the devil from climbing in.”

He told me that he has done this ever since he was a little boy, and one of his uncles told him that after he yawned a devil had climbed into his throat. He also remembers his mother and father making the sign of the cross after they yawned.

I have personally never heard of this superstition until now. It shows how religion can create many customs and beliefs and how fear perpetuates them.

According to Lebanese folklore, my informant said, bad dreams should be interpreted as signs of good fortune.  (This would be reassuring to me, as I have had my share of them!).  The superstition says that once a scenario is played out in a dream, it will not be repeated in reality.  Thus, it is also reflexive: a pleasant dream should not be received as a sign of good fortune to come.
My informant was not aware of the origin of this sign-superstition.  He learned it from his family, none of whom he says actually believe it.  I would most likely postulate monogenesis as a model for the origin of this superstition, as it is unique and counterintuitive.
This is indeed a unique perspective on dreams, one I have never encountered before hearing the superstition from my informant.  As with many superstitions, odds are that there is some element of belief somewhere back in my informant’s family.  Otherwise, it would be unlikely that the superstition would have been passed down and remembered by succeeding generations.