“The Leopard used to live on the sandy-coloured High Veldt. He too was sandy-coloured, and so was hard for prey animals like Giraffe and Zebra to see when he lay in wait for them. The Ethiopian lived there too and was similarly coloured. He, with his bow and arrows, used to hunt with the Leopard.

Then the prey animals left the High Veldt to live in a forest and grew blotches, stripes and other forms of camouflage. The Leopard and the Ethiopian were hungry and consulted Baviaan, the wise baboon, who said the prey animals had “gone into other spots” and advised them to do the same. So they went searching and came to the forest. They could smell Giraffe and Zebra there but could not see them. When night came, they managed to catch Giraffe and Zebra by sound and scent. Asked why they looked so different, the two prey animals demonstrated how easily they could disappear against the forest background.

So the Ethiopian changed his skin to black, and marked the Leopard’s coat with his bunched black fingertips. Then they too could hide. They lived happily ever after, and will never change their colouring again.

The second version is told by the native Africans and goes as follows:

The leopard used to be as white as snow. It was always difficult for the leopard to catch its prey and had to work very hard at it. After the hard work it would go and rest in the shade of the tree.

The wart hogs used to love playing and rolling in the mud in the nearby waterhole. They still do this today.

One day they were playing like this and heard the roar of a lion. They got such a fright and ran right over the leopard leaving little brown spots on the beautifull white coats.

At first the leopards were very upset but then they realized it was much easier to catch their prey and to this day they have kept their spots.”

The three items of folklore I collected from this informant were the only three out of all the items in my collection that were not a result of face to face interaction. The text above was sent to me, from the informant, via email. I also corresponded with the informant over the phone to receive the context behind her stories. That said, the informant, who lived most of her life in South Africa (she moved to Dallas, Texas with her family in the 90’s), heard both of these variations of this classic African legend when she was a child. She recalls hearing them in elementary school and listening to a version of the story on a cassette player. She likes the second version of the story better because of its depiction of how animals actually congregate around watering holes in real life.

From my research of this tale, I discovered that the first version of the story the informant related is a variation of a Rudyard Kipling story entitled “How the Leopard Got His Spots.” That said, I theorize that Kipling’s version of the story became the canonized version from which all future stories referred to and grew out of.

Both variations of the tale focus on the relationship between predator and prey, reflecting the age of the story. The first variation of the story, in particular, features a human as a hunter. That said, the story might be as old as the hunter gatherer society it depicts.

Here is a link to Rudyard Kipling’s “How the Leopard Got His Spots”:  http://www.sff.net/people/karawynn/justso/leopard.htp 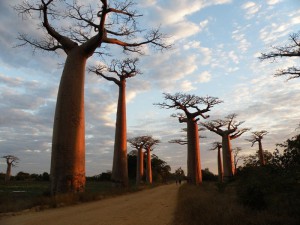 “Okay, so this is from South Africa. The tokoloshe is this creature type thing. The way it works is he’s like this creature thing and it rides on this bicycle, or no it’s like this unicycle. And, like, you’ll just be like walking down the street and you’ll see a unicycle with just like shoes on it, like going down the street. Like the shoes themselves are pedaling the unicycle, and it’s weird as shit. And that’s the tokoloshe, right. And it’s this thing that no one can describe how it looks, you know, it’s invisible, it just has shoes or whatever. And, uh, it appears to children who put hot pap, which is like grits, but like not really. It’s like slightly different, it’s like, you know, cornmeal-type stuff. But if you put it—and it’s hot—you put it under your bed the tokoloshe will appear to you the next day or some shit. And he comes up to little kids and he’s like ‘Hey do you want to play marbles?’ and he starts playing marbles with them, right? And if you say yes, you want to play marbles, then, uh, you know, you’re never seen again. And that’s it.”

Very weird folk creature from South Africa, likely used by many parents to frighten children. Cautionary tale type stuff used to discourage unwanted behavior, whether it be playing with marbles or perhaps other frowned upon activities. Putting hot food under the bed to attract it could mean food is supposed to be eaten entirely. Like, hiding part of a meal causes the Tokoloshe to seek retribution. As to the invisible unicycle aspects, I haven’t the foggiest. Something very sinister about an empty pair of shoes.

Annotation: The tokoloshe gets several mentions in the 2003 film The Bone Snatcher, a British-Canadian horror movie. Though the creature in the film isn’t explicitly a tokoloshe (but rather a swarm of ants that join to form a body using the bones of their victims) but it is referenced, which is to be expected as the director, Jason Wolfsohn, is South African.