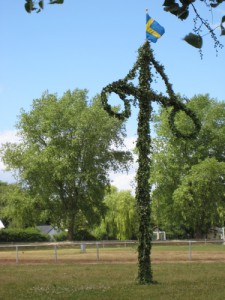 So every year we have what’s called “midsummer”—its in June every year. And we have a maypole, which we dress with flowers and all this, like, nice stuff. A maypole is supposed to be a sign for a woman and man. It’s like a big pole… it’s like a cross almost. And there’s this special song that we sing every year, and everyone has em…those things on their heads. What do you call them? Flower wreaths? Yes, flower wreaths. Everyone has flower wreaths on their heads. The song is called “little frogs”. So we have the maypole and there is singing and jumping, and the sounds we make sound like frogs.

This Swedish ritual is a celebration of the arrival of spring. The maypole—a pole that bears symbols for both masculinity and femininity—represents the fertility and life that is associated with spring. When I asked why the frog played such an important role in the celebration, Stina replied that the frog jumps, and the jumping is supposed to represent the leap (or the “spring”) from winter to a time of blossom and growth.

If speaking in Freudian terms, the pole itself could very well symbolize the phallus and its ability to disseminate its seed and be a catalyst of birth and growth. The flowers could represent the innocence that will soon be taken away once male and female unite.

In the United States I have never heard of any celebrations of spring or any particular season in and of itself. Toward the end of the winter we usually keep an eye out for the ground hog that “springs” out of his whole to tell us how much longer winter will drag on. However, there exists no celebration of the spring’s arrival.

Zsuzsa, who is originally from Hungary, told me about a Hungarian tradition that happens every year on Easter Monday. On Easter Monday, boys and men go around town (door to door)even to unknown peoples houserecite a poem which in fact said that I have come along way, and I was wondering if I can spray you with perfume. Then the hostess says yes and then they spray the person, and at the same time the hostess brings out a basket of painted and ornamented red eggs or sometimes chocolate. And then if the hostess knows the men or the boys, then she invites them in, and they treat the people with snacks and drinks and the drinks are such that by the end of the evening, the older men get really drunk because every place they went they got something to drink. The older version is that the boys go on to these visits with a bucket of water, and they actually get the girl into a conversation, and then they throw the whole bucket of water on the girl. Since its in April, the water is cold since it comes from a well, and the weather is still cold so sits quite a shock. Invigorating.

Zsuzsa sent me a link to a video on Youtube showing this process: http://www.youtube.com/watch?v=g2B3oJBTyqY

She also sent me the text for a spraying poem:

This is loosely translated to:

I went round-woods
I saw a blue violet.
He wanted to fade
It is to be watered?

Essentially, according to Zsuzsa, it basically says Can I spray you? at the end.

Zsuzsa and I discussed the origins of this tradition. She said the following: My understanding is that this has to do with the spring festival. Interestingly, when I saw the video of the water throwing, is when I first realized that maybe they were throwing it at her crotch, so it reminded me that maybe the original meaning means to reinstate fertility and celebrate spring fertility. Its probably been happening for hundreds of years. Hungary has a history of two thousand years, and this probably is a Christian tradition, and it was King Stephen who converted the whole country to Christianity in the year 1000, so we have a 2000 year history, with 1000 years of Christianity. Tradition has its origins in throwing water at each other because it has the idea of renewal in the spring with it, and that slowly changed to perfume throwing. The Biblical origin has that the soldiers were at Jesus grave and they were protecting the grave and the women who were around there. When the women saw that Jesus rose, the soldiers were trying to calm them by throwing water at them. Also, the red color of the eggs given out after the perfume spraying has to do with Jesus blood, and the coloring and painting of eggs is a worldwide tradition.

We also discussed the differences between this celebration of Easter and other celebrations. This is the modern version of what we call Easter Monday. In Hungary, Sunday is when people go to church, and Monday is the day when people socialize and go around with this spraying thing. The big difference I find between that and in the United States is that Easter Monday in the United States is such a regular day but in Hungary Easter Monday is a big holiday. People dont go to work, they have the day off. And thats what they go to do, they throw perfume at each other.

In terms of personal experience with this tradition, Zsuzsa said: Its funny when you get that splash of perfume on you, and its stinky. Most of the time they use cheap perfume because they are going to use a whole bottle. As a child you start resenting the idea. People then visit for a long time, so the socializing aspect of meeting up with peoplesometimes its the only time of the year you get visits from people you havent seen in a long time. Its the idea that you get so stinky that you really have to get a big shower and wash your hair at the end of the day because of the perfume smell.

In terms of this tradition and traditions in general, Zsuzsa is usually in favor of tradition. I like traditions, I like when people like to maintain and support and practice traditions, be that religious or whatever. I like it. And Im not one who is good at maintaining or practicing them. So I really love that people do it, but if I had to make the effort I probably wouldnt. If I were the guy I probably would not go and do it. But as a girl, because they do come to your house, you end up just preparing anyway. I love traditions, I love these cool ceremonies.