This piece is about specific German foods, specifically baked goods, that are eaten at Christmas or other special occasions.

“My maternal grandmother came from Germany, first generation, so her parents came from Germany. So she had a lot of German traditions, but the ones I remember the most about her had to do with baking and very special baked goods and pastries for certain occasions. She made something called a stollen every Christmas morning she would make it fresh and everyone had to have their stollen before they could open their presents. When there were special occasions, like when we had lots of family around she would make lebkuchen and she even had a special pan for it. It was a pastry with fruit on the top and it was amazing. But she always insisted certain pastries for certain occasions.”

This subject is an adult woman who remembers her grandmother and the traditions from her German heritage she brought to the holidays. The subject has German ancestry that would be highlighted through foods at the Christmas time or when there were large family gatherings. She learned these foods from her grandmother. Though she does not continue the tradition exactly, she makes cinnamon buns that her family must eat before opening presents these days.

These kinds of foods remind me of baked goods traditions like having cake on your birthday or a wedding cake. The idea that there are certain pastries for certain occasions rings true with those kinds of baked goods as well. I think it is nice that the subject also tries to keep the tradition alive in her own way by making cinnamon buns. This kind of shows the evolution from one kind of cultural food through the change of culture the subject is in. As a person that does not identify as German, the subject makes the tradition “her own” in a way, while still holding on to her heritage. 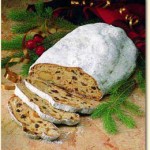