Description: In Armenian mythology, pomegranates symbolize fertility and good fortune and the guarding of the evil eye. At a wedding, a bride throws a pomegranate and breaks it into pieces. The scattered seeds symbolize that the bride will bear children. Also it is believed that women who want to have a son, should eat bread made from dough made with pomegranate seeds.

Background Information: This is a very popular symbol/tradition in Armenia. The pomegranate has become a symbol for Armenia. If you ever visit Armenia, you would find pomegranate symbolism every where you turn.

Context: The informant told me about this symbol during a conversation in which I asked her to tell me about an Armenian tradition/folk symbols that she knows about.

Thoughts: I think that fertility and good fortune is very valued in Armenian culture. After the attempted genocide by Turkey, it has become very important for Armenians to repopulate and keep the Armenian culture alive and strong. I think the use of the pomegranate was done as a way to remind Armenians about their heritage, strength, and ability to persevere.

Context: This name was given to my dad by my grandfather or his father. This name is a title given to sons who have surpassed the expectations of their father.

Interviewer: Can you think of any superstitions or rituals you had when you were figure skating?

Informant: Me? No I wasn’t superstitious at all. I remember other girls that would do stuff. Stuffed animals are a big part of skating culture. Some skaters have one singular stuffed animal that they carry everywhere, throughout their entire career. Sometimes when a skater performs really well at some event, fans will throw their animal onto the ice.

Background: The informant is my mother. She started skating at a very young age when she was growing up in Maine. For her, figure skating was an outlet from a rough home life. She learned of the significance of stuffed animals to figure skating through first-hand experience at her local ice rink. This interview was recorded in person when she came to visit me here at school.

Analysis: I assume there is probably good reason for the relatively low notoriety of this piece of figure skating lore. For one, it is exclusive to high-level figure skaters who are performing in a competitive environment. As such, this tradition hasn’t permeated into the mainstream due to the difficult barriers-to-entry within the figure skating community. The informant stated that fellow skaters would treat their own stuffed animals “like they we’re diamond encrusted”. Off of that, I assume that high-level figure skaters are naturally protective of their totems. If the most prominent members of this community are reluctant to speak on this significance of the stuffed animal to the figure skater, it is difficult anyone to learn of this tradition. I was also curious to see if the informant could remember why one skater would pick a certain animal over another. The informant couldn’t remember exactly but thought the decision was based on personality. If you consider Figure Skating to be a form of artistic communication, which is the consensus, than the significance of the animal combined with the act of throwing stuffed animals on the ice in praise takes on a different meaning. The figure skater chooses a specific stuffed animal that aligns with her identity. When they are performing they are conveying their own identity through their art form, which is figure skating. If done successfully, the audience will then affirm the figure skater’s performance and identity by throwing the same stuffed animal onto the ice in an act of approval.

The informant recounts the different religious and cultural stories that he heard while growing up as a child.

S: Do you have the thing of the three wise men? It’s a Catholic thing.

S: Like you put your shoes out and then the three wise men from Jesus’ birth come and give you gifts

S: That’s pretty much it. Like parents put money in your shoes obviously instead of the three wise men. It usually happens around Christmas but I forget the exact date.

C: Oh so is this something that you or your family did?

Biblical stories are often told for the lessons they are able to impart on the listener, but also for entertainment. The tale of the Three Wise Men is one such story that encompasses many functions. The three men are figures of great status in society and they all see an unusual new star in the sky, and knew that it told of the birth of a special king in Israel. This marks the coming of Christ into the world and the spark of Christianity as it exists today. To welcome Jesus’ arrival, they presented him with gifts that hold symbolic meanings in Christianity. Gold was given as something that is associated with kings and the idea that Jesus was to be the King of other kings. The other two are Frankincense, a symbol used to show that people would worship Jesus and
Myrrh, a perfume that showed Christians of Jesus’ eventual suffering and death. The act of giving gifts is still something that we do til this day and it is curious to see if many base their tradition of gift giving to this tale in the Bible.

For another version, see: All About the Wise Men 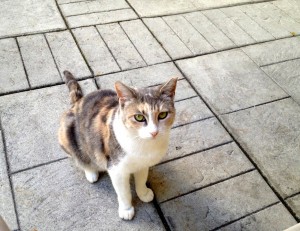 This saying is one that my informant said she uses on a regular basis:

“No matter how thin the pancake, there are always two sides”.

My informant said that she learned this proverb or saying from a friend that was born and raised in Japan. Her name was Kozuko, and my informant met her in the 1980’s when her husband was stationed in Japan for the army. My informant believes that it was a proverb that was common within Kozuko’s family. Kozuko had translated the phrase from Japanese and told them how to say it in English. My informant thinks that it originally may have been a different word than ‘pancake’, because those are not a Japanese food. My informant uses this saying, she says, to express that there are always two sides to a story. She told her kids this when they would make decisions without considering the consequences or the people that they could hurt in the process. She says that she always thinks of her friend Kozuko when she uses the phrase, and is happy that she was able to bring it back to California.

I, for the most part, agree with my informant’s analysis of this piece of folklore. I believe it was likely developed as a more clever way to say that there are two sides to every story. I believe that this metaphorical way of saying that is a good way to get the message across. I had never heard this saying before, and after researching it more, could not find many sources and sites of it. This leads me to believe it is a rather rare saying, and potentially rarely translated from Japanese, or wherever its true origins lie.