PL was visiting the giant’s causeway in Northern Ireland, and ran into someone there who started telling her about the legends surrounding the place.

“The giant’s causeway, a natural rock formation, was thought to be the giants’ stepping stones out of the water.

The Scottish giant took one look at him, decided that if that was the baby, he sure as hell didn’t want to meet the parents, and turned around and went home.” 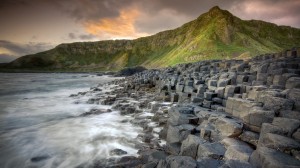 I love that the natural formations of the area were inspiration for tales such as this. It really does look like giant steps, and is understandable how it plays a large part in the folklore of the area. The tale also very much plays off the idea of the us vs them mentality, with the Irish giant in opposition to the Scottish giant. There’s also cultural pride in that their giant was able to outwit the Scottish one despite the other’s advantage.