The informant, who was born and raised in South Korea until immigrating to the United States as a young adult, tells a popular childhood fairytale about a woodcutter and a heavenly maiden. As far as the informant knows, the tale dates as far back as at least the Chosŏn Dynasty, the last and longest-lived dynasty in Korea that began with General Yi’s proclamation in 1392 and ended in 1910. According to her, it is one of the most oft-told tales during childhood, and that most children’s storybooks would include it. In fact, the informant herself had a published version of the tale in a children’s book she bought for her own children. The text and images included are from this book, the story re-told by Lee Hyung Sung, illustrated by Lee Mung Sun, and published by Ji Gyung Sa.

The informant finds “The Heavenly Maiden and the Woodcutter” a touching story because of its ultimate sadness. She feels that Western tales, she cited Disney renditions of fairytales in particular, are easy to forget because “each one makes you feel the same way. . .they leave you happy, but children are happy most of the time, so wouldn’t a child remember something better if it made them feel sad?” The sadness and bitterness that concludes the story is not necessarily a result of anyone’s faulty behavior or poor judgment. Rather, the informant explained, it is a set of unfortunate circumstances that leads to the forced separation between the woodcutter and his wife and children, so by the end of the tale there is no one or nothing to truly blame for the situation. For that reason, she remembered this story above all other childhood tales that she heard, and she knew she wanted her children to hear it as well, to show that sometimes, in life, it is futile to struggle to find a concrete reason behind the sadness that we will all come across in life.

Long ago in another land, there was a woodcutter who lived in the countryside with his old mother. He was so poor that even though he was an adult he could not get married. No one wanted to marry him because he was so poor and living with his mom. So his wish was always to get married. One day, he was in the deep forest cutting and collecting the wood, and there was a deer running hard toward him. The deer asked him, “Please save me! The hunter is coming after me! Please help!” The woodcutter told the deer to hide underneath his pile of chopped wood. Sure enough, a couple minutes later the hunter came passing by and asked the woodcutter, “Have you seen a deer running?” The woodcutter told him, “The deer went all the way that way” and pointed him in the wrong direction, even though the deer was hiding underneath the pile of wood. So, of course the hunters follow the path  the woodcutter pointed to, and a couple minutes later he lifted the wood and told the deer, “Okay now you can come it, it is safe.” However, this deer was a spirit of the forest and he told the woodcutter, “Thank you so much! In return for your kindness I’d like to make one of your wishes come true. So, what is your wish?” The woodcutter explained, “Well, I am so poor and even though I’d like to get married there’s no lady to get married to. . .I want to be married.” The deer told him, “In the deep forest, there is a big pond. Every 15th, when there’s a full moon, heavenly maidens descend from the sky and bathe in the pond. Go there and hide one of the maiden’s outfits, which allow them to fly back to heaven. If you hide it, one of the maidens will not be able to fly, and you can take her to your house, where she will be your wife.” The deer firmly added, “Remember, no matter what do not give the maiden her outfit until she has had three children.”

So, the woodcutter followed the instructions. He really went deep in the forest during the full moon and, sure enough, the maidens were out and having fun bathing. He went to where the clothes were piled and then hid one of the robes behind a tree. When the maidens are done bathing, they put their robes back on and fly up to the sky again. But one of the maidens kept looking and looking for her outfit and couldn’t find it and she began crying. So, slowly the woodcutter went to her and told her, “Here are some clothes, would you come with me?” (they were human clothes, of course). 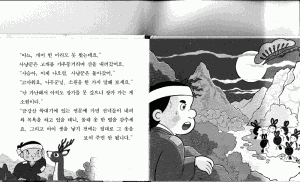 The woodcutter reaches the pond

She had no choice, so she went with him and became his wife. They had two kids and lived very happily. But, every once in a while, always during a full moon, she would look at the sky, missing her home. The woodcutter felt really bad watching her missing home, so he thought that they seemed happy enough―they already had two kids―and maybe it was okay to give her the winged maiden’s outfit. So one night when she was crying again he gave her the winged robe and explained that he trusted her not to run away because he could see that she was happy. She was happy, and asked if she could try it on. Of course, as soon as she put it on the feeling of flying and of seeing home returned to her. She held her two kids―one in each arm―and flew back to the sky in her winged robe. The woodcutter has now not only lost his wife but his two kids, as well. He cried every day. 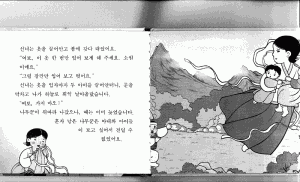 The heavenly maiden flies away with her children

One day, the deer came back to him and said, “I told you not to give her the winged robe until she had three children. The reason being that she cannot hold three―she only has two arms! No matter what, she could not bring herself to fly without her children. But, you didn’t listen to me, and now this has happened. I will give you one more chance. After the time when you hid the robe, the heavenly maidens don’t come down to the pond anymore to bathe. Instead, they send a bucket from the sky and lift the water to the heavens. When the bucket comes down to the pond, get in the bucket and it will lift you to the sky.” Again, he followed the instructions and, sure enough, the next full moon a bucket came down from the sky. He hopped in the bucket and was lifted to the heavens. 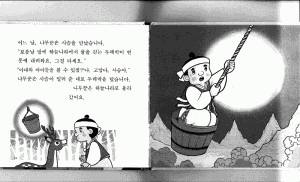 The woodcutter ascends to the heavens

He saw his wife and two kids, who were so happy to see him, and his wife asked if he could stay and live with him. He stayed there until the next full moon, but soon he became worried about his mom back on Earth. He was happy, in a way, but still missed his mother back home. So the heavenly maiden said, “Since you are missing your mother so much, I will give you this winged horse so you can go to see your mom, but please come back! You must be riding the horse the whole time; if your feet touch the ground, the horse will fly away and you will not be able to come back.” He promised his wife he would just visit his mom and he would return right away.

The winged horse took him to his mom, but he could not jump off to the ground. He explained this to his mom and she understood. That day, she had made a really hot pumpkin porridge, which is one of the woodcutter’s favorite dishes. She told her son, “That’s okay, you don’t have to come to the ground, but I made some delicious pumpkin porridge and I will bring it out to you. You can eat it on the horse and then go back to the sky.” She brought the bowl of soup and he was eating while still on his horse. By mistake, he spilled some hot porridge on the horse, who cries “Aiiiih-aiiiih” and jumps up and down in pain. The horse’s rocking knocks the woodcutter to the ground and, of course, the horse flies away to the sky. The woodcutter had no way to return; the maidens no longer even sent the bucket down anymore. From then until the day that he died, the woodcutter looked up at the sky in search of his wife and two kids. After his death, the woodcutter became a rooster, and that is why we now see the rooster look up at the sky and cry “Cuckaeioooo, cuckaeiooo.” 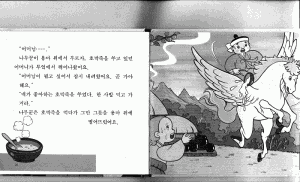 The woodcutter spills hot porridge on the winged horse 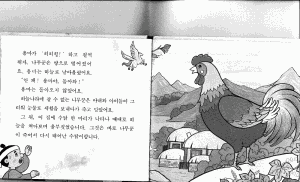 The woodcutter's soul as a rooster

“The Heavenly Maiden and the Woodcutter” has many elements expected of a fairytale. Animals are personified and humans can travel between the earth and heavens, indicative of a mystical world that is typical of the fairytale setting. The story is, however, quite sad and moving at the end, as the heavenly maiden and the woodcutter never reunite and neither are truly happy. The sadness and bittersweet nature of the tale (because, in the end, the couple’s separation was cemented by an accident) seems somewhat unconventional for a children’s story, but perhaps this is only because so many western children consume sanitized versions of children’s stories.
A number of interesting observation can be made from the tale. For one, it is clear Korean culture places importance on the lunar cycle; much of the tale’s pivotal moments revolve around actions the occur on the full moon. Additionally, the spirituality and wisdom of the deer suggests little invincibility and superiority, if any at all, attributed to humans. Furthermore, the maternal connection between a mother and child is clear and strong―the informant spoke of the heavenly maiden leaving with her children despite her Earth-bound husband quite neutrally, as if the reasoning behind this is natural and understandable. Lastly, the ending of the story is akin to that of a myth, because the tale not only tells a story but also explains why something has come to be the way this it is in the world today.