The following myth is that of the mythical creature, the Krampus.

“Ahhhh the Krampus is the demon servant of St Nicholas. He exists in some parts of Switzerland but mostly it’s in the Alps of Germany and Austria. Um, he really only exists today in kind of remote areas in the mountains of northern Germany and Austria.  The Krampus is kind of what they base a lot of modern devil themes off of but he has antlers and hoofed feet and he’s all red and has a big long black tongue, and obviously there has always been a kind of sexual connotation with him and his tongue.

Originally he was with the St. Nicholas mythos and he is the demon servant of St. Nicholas. Where as St Nicholas gives gifts to good children on Christmas, the Krampus punishes the bad. The original thing of getting treats and candies and little trinkets in your socks from St Nicholas originally came with a bipolar one where the Krampus would stick sticks and twigs and rocks in your shoes. And there’s three levels to it. If you were bad, he would stick sticks and twigs and rocks in your shoes and then if you were really bad he would beat you on the ass with birch sticks. If you were really extra bad he would take you in his basket that’s on his back to hell for the day and that was your treat for Christmas, but you had to be a really naughty person to get that. So there’s three levels to Krampus. There’s bad, pretty bad, and then ultra bad.

The Krampus has an affection for loose women—especially whores, it’s particularly hookers, and actually loose women like the Krampus. The Krampus disappeared some time in the early 19th century—more late 18th century, because they thought it was cruel, and then he kind of made a renaissance in the late 19th century in post cards where he became a really popular—pretty much one of the most popular things in print on post cards in late Victorian Germany and Austria. Then he died down and surprisingly recently in popular culture has made a minor come back so uh, yeah that’s the Krampus. In  German culture he has also recently made a come back slightly. Um, probably more because he’s just fun. For all us disenfranchised youth who don’t like Santa Claus… I mean, he’s a pretty cool guy. I dunno Lauryn, do you want to have sex with the krampus or do you want to have sex with Santa Claus? You have to answer that…”

My informant is of German decent and was told about the Krampus when he was a child by his father. The Krampus acts as a method of keeping children in line and making sure they behave. If children do not behave, not only with they not get presents on St. Nicholas day, the Krampus will punish them for their bad deeds. The severity of their punishment depends on how poorly they behaved. It can be seen as a much more severe version of the western myth of Santa Claus putting coal in the stocking of bad children in place of presents.

The Krampus has made appearances in popular culture over the years. 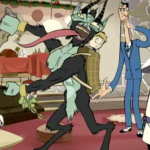 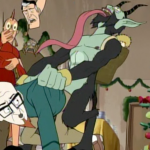 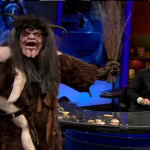 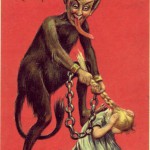 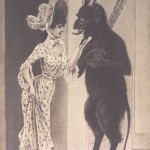 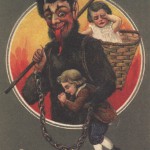 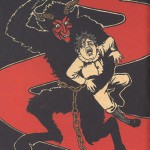 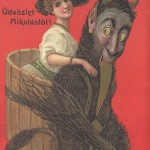