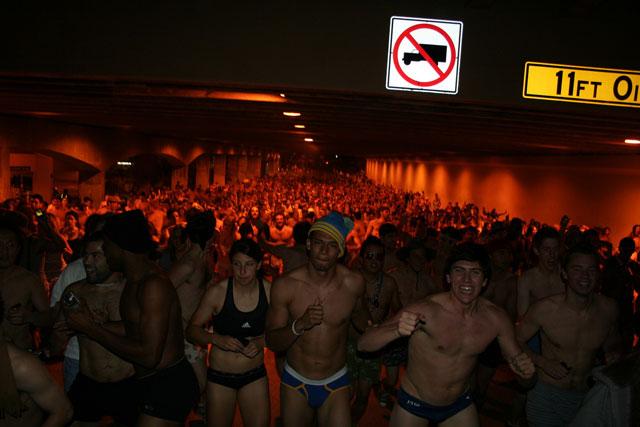 This particular tradition is actually something I was able to take part in, even though I attend UCLAs rival school USC. My brother enrolled in UCLA as a transfer student and therefore came in a junior. He commuted his first quarter, so it was not until his second quarter when he moved into on-campus housing that he began to experience the life and traditions of a UCLA student. One such tradition is the undie run, undie being short for underwear of course. This event takes place on the Wednesday of finals week when students strip down to their underwear and make a mad dash across campus. There is no particular reason for the run other than a way to burn off energy and relieve a little bit of the tension and stress associated with finals. After the run, students normally gather in the quad and exhibit school pride, whether cursing their cross-town rivals or partaking in other Bruin traditions such as the UCLA 8 count.

UCLA is not the only school with such a tradition however; there are many variations of stress-relieving traditions organized by the student body that garner high participation on other college campuses as well. Typically, students come together, like those at UCLA, en masse and create some sort of commotion or ruckus as method of coping with the rigors of finals. In fact, USC has its own version of the undie run. Deemed the Fountain Run, seniors and other upperclassmen run around campus, looking to jump in one of USCs many fountains during the last week of class. This is because they are almost done with school entirely and therefore fear no disciplinary repercussions.

I feel these traditions create feelings of school pride and are a welcomed spectacle, even if they cause a large commotion. Each school has its own customs unique to the campus, which students feel makes them closer to the school for having experienced such an exclusive event. Although I have not witnessed or partaken in a USC Fountain Run yet, I am excited for when I finally do get the opportunity.