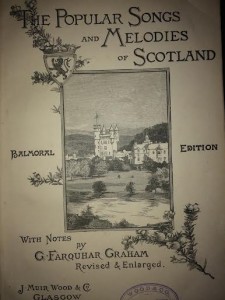 My informant has a very interesting story. She is Scottish, but grew up primarily in England, near London. Informant’s parents were both very Scottish and so much of who she is surrounds this Scottish heritage. In this particular piece, she outlines much of her story as she is flipping through an old Scottish book of songs that she is showing me. When I asked her about folklore from her past, what comes to mind the most is folk music — as she is a singer. The book is old and falling apart. We are looking at it together. It was printed in 1884… She is gazing lovingly at the book, gingerly flipping the pages. My informant loves music. Everything in her life has to do with singing. She has been a singer her entire life and even now continues to sing in the church choir. Ever since I was little, we have always sung together; it has always been our special bond. She says that I got my singing skills from her. It makes sense then, that we now sit down and for the next 5 hours, go through this book.

Informant: “It smells old. It’s so Scottish [laughs] I inherited this book from my Aunt Mary, my sister Anne got it and then it was given to me. Aunt Mary was my mother’s oldest sister, she was the singer and she had all of these old music books. She would have gotten it from her parents. I am McCready but this came from the Riddell side of the family. The McCready’s were once O’Gradys, coming from Ireland and wanted to blend in when they went to Scotland.

I was born in London but what happened was, my parents were engaged for seven years. This was during the depression…they had no money. My father was a good electrician and he wanted to have his own shop. And people needed work done because… he couldn’t get paid but he was doing the work for free for the people because he was too kind. He decided he needed to get a job in London. He worked at the Dorchester Hotel in London and saved up and married my mother in Scotland, as soon as they married they went back to London. They had no money to stay in hotels, none of that. They were married in 1936 and had a nice little flat near Clapham Common, buildings that are still there. I was born at the end of 1938 and the war was rumbling around at that point and they decided to go back to Scotland, they put all of their furniture in storage and they got on the train and I was very precocious, verbally, and my mother says I jumped around all night long singing a soldiers war song, “Roll out the barrel” all night long. They were exhausted. My father had a job keeping the lights on while the fighter-bombers went. I lived in Largs, I have fond memories of that. So we lived there.

Then in 1944 we were back in Glasgow and had a little apartment and my father had his first heart attack and things changed. We came back to England after that. I remember him saying when he was young, they didn’t have trade unions and workers never had any rights….[looking through book]…but here! This is called Annie Laurie..This is one of those things that I’ve known forever. My father used to sing it. My father used to sing in choir, you know.” [She reads the lyrics out loud in her Scottish accent]

Where early fa’s the dew,

And it’s there that Annie Laurie,

Gi’ed me her promise true;

Gi’ed me her promise true,

Which ne’er forgot will be,

And for bonnie Annie Laurie,

Her face it is the fairest

That e’er the sun shone on;

That e’er the sun shone on,

And dark blue is her e’e;

And for bonnie Annie Laurie

Her voice is low and sweet.

Her voice is low and sweet,

And for bonnie Annie Laurie

[Photograph is the inside cover of the book]