Informant-Wesley Ball: This piece of legend has been passed down through the Ball family for generations. It tells of our heritage and the possibility of a late relative of ours. My father heard it from his grandfather and it is an important story to our family. Wesley Ball is a 50-year-old male from Marion Indiana. Conducted via phone interview.

Historic overview of the Ball legend can be found here:

Thoughts: I was raised hearing this legend from my father and often told people at school I was related to George Washington, especially when I was younger, I still like to believe that I am one of his descendants but I can not know for certain.

Informant-Wesley Ball: This piece of legend has been passed down through the Ball family for generations. It tells of our heritage and the possibility of a late relative of ours. My father heard it from his grandfather and it is an important story to our family. Wesley Ball is a 50-year-old male from Marion Indiana. Gathered via an email.

Legend: Papa was born in 1929. He graduated from High School at the age of 16 and entered Clarkson College under the Reserve Officers Training Program (ROTC) where he got a degree in electro-mechanical engineering in exchange for a 5 year commitment to the U.S. Army Corp of Engineers. He graduated and entered the Army in 1949 where he was stationed at Fort Bragg in Kentucky. A year later, the U.S. entered the Korean Conflict. Engineers had a very dangerous job. They were tasked with clearing mine fields, building bridges while under fire, and doing construction on the front lines. Engineers were getting killed and wounded constantly. As a member of the Corp of Engineers, he assumed he would get shipped out to the war at any time. But new engineers came and went and he never was moved from Ft. Bragg. He worked on base doing the same office job. The Korean conflict ended in 1953 and papa was still sitting at FT Bragg doing the same office work for the Corp of engineers. He kept doing his job until he was supposed to be discharged in 1954 after fulfilling his 5 year commitment. When the time came, he didn’t get his discharge papers and he stopped getting his army pay. He started asking questions and nobody could figure it out. They had no record of him at FT. Bragg but the Army paymasters in the Pentagon had him as discharged. After a 2 month investigation they found papa’s army file, it had been mishandled and his file had slid down to the bottom of a filing cabinet. He was discharged and moved on with his life. But had it not been for the lost file, papa would have been shipped to Korea and given the high casualty rate for enginers, if not for the Army’s mistake, we may not even exist!

Thoughts: I love this story because I want to believe that it really happened. I was always told this by my father who made it clear that this story is the reason I exist!

Informant-Wesley Ball: 50 year old male and my father. This is a piece of legend from Texas that my father grew up with because he is from Austin.

Sam Bass Legend: When I moved to Texas I was 12 years old, entering 7th grade at Round Rock Middle School. We moved to the northwest side of Austin, basically in the boonies where our neighborhood was surrounded by the Texas hill country wilderness. The local legend was Sam Bass. He was a notorious outlaw that operated in the Austin – Round Rock area after the Civil War. He robbed banks, trains, stagecoaches and was a known killer. He liked to hide out in the hill country after his robberies and was known to stash money in caves. My friends and were avid snake catchers. We would go all over the countryside looking for snakes to add to our collections. Whenever we were out hunting snakes, if we saw a cave or a hole in the rocks, we would make sure it was clear of snakes then we would look to see if there was any Sam Bass booty in the the rocks. We never found anything but there are supposed to be stashes out there to this day.

Thoughts: This is one of my favorite stories my Dad tells. I love Texas and the folklore from there is so interesting. My Dad is so outdoorsy and has made me so similar I would likely be doing the same thing as him if I had grown up with this legend

History: This is a common legend in Texas often told in many different versions. The legend and history can be found here:

Informant: Zoe Virant collected this from her mother about her grandmother. Zoe is 18 and my best friend at USC. She loves this story because she grew up hearing it and her family believes that it is true. Received via interview and annotated.

Tale of Zoe’s Grandmother: Nana was born 1932 in Chicago. It was during the great depression and Prohibition. Great grandpa worked as an electrician and do to the times didn’t make a lot of money. Because it was prohibition, there were many illegal breweries making beer in Chicago. Many if not most were run or operated on behalf of Al Capone. There was one near the apartment Nana and her parents lived in. When brewing beer, the beer needed to age for a couple of weeks to ferment and develop alcohol. The brewers didn’t want to keep all their aging barrels in one place because if the got busted, their stash would be destroyed. Therefore they would pay locals to hide barrels while they aged. Grandpa did this to make extra money so there were always a few barrels stashed around the apartment. As nana was learning to walk, they would turn a barrel of beer on its side and nana would push it around the apartment. Supposedly turning the barrels helped them age faster. So nana learned to walk pushing Al Capone’s beer around the apartment!

Thoughts: I am from Chicago so this story was very interesting to me. Al Capone is such a huge figure in folklore in Chicago that its amazing to think that my friend at USC has folklore in her family associated with Al Capone.

Informant: Nicolas Williams who is 18 and from Mexico City, Mexico. He is a student at USC that I interviewed. This is his favorite holiday to celebrate in Mexico.

The Day of the Dead (Dia de los Muertos): ” It’s on November first and every year we make a table, called an ofrenda, with pictures of our relatives that have died. Then we make all the food that they liked and we add flowers in order to honor them. Then there is a big party and we light candles and celebrate their deaths. Our family throws a big party every year and after we go and walk in a huge parade to the cemetary where we put flowers, usually orange, and gifts on the graves of our relatives. Everyone dresses like skeletons and in bright colors, some look actually really scary. It is similar to halloween in America I guess but a lot more about celebrating and honoring those who have died. We spend a long time preparing, usually a month because it is such a big deal in our family. We also eat bread of the dead and its very sweet and delicious. My favorite part is the parades because even though we are honoring the dead, everyone is happy and upbeat and its a great time to remember and pray for everyone that I love who has died”

More information can be found here on the holiday: 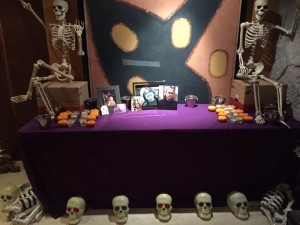 Day of the Dead, Nicolas’s picture