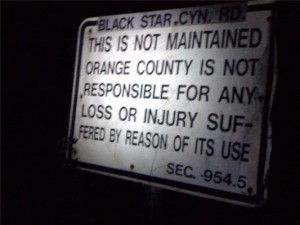 This sign warns individuals that the county is not held responsible.

My informant tells me that there is a very eerie hiking path within a canyon in the city of Orange. This canyon warns it entrants that the area is not maintained by the city and also the government is not responsible for any injuries or loss that occurs in this place. He states that this was a local spot to hang out in during high school, to either go do drugs or go and get scared. My informant states that kids in high school would take flashlights and cameras, to go and take pictures of the haunted landmarks while night-hiking.

The landmarks that are known are the haunted tree, overturned bus, the forsaken campsite, and also man known as Blackstar Bill. The haunted tree is supposedly haunted by the ghost of many unfortunate people that were punished with nooses there by white supremacists. These ghosts are miserable and angry and if you do something disrespectful to the tree, ghosts will appears. My informant stated that his friend decided to urinate on the tree and they heard noises, thus they ran away as fast as they could. The overturned buss is another landmark that is known for being haunted, as children died there unfortunately as the bus driver loss control. The forsaken campsite is known to be a very eerie-looking campsite that looks like it has been left alone for a long time. Supposedly there are very insane people that live at this campsite that are the remnants of an abandoned mental institution. There also is reasoning that this campsite is home to Satanists and White Supremacists who meet here. Lastly Blackstar Bill is a deranged mountain man that lives within a cabin in the woods. He will shoot at you with no regard for human life and will state that you are trespassing on his property, thus he has the right to kill you. These are the landmarks that kids usually try to get to a night and take pictures of. My informant states that he once went there and saw odd red eyes within the overturned bus and never has gone back. He also states that there are signs along the hiking trail that state that police will not help you beyond these points.

My informant states that the Legend of Blackstar Canyon is still prevalent within many Orange County high schools. He states that he told his younger brother about this myth and that he already knew about and also ventured there before.

This definitely is a legend quest that offers high school kids on a boring night a thrill. What is interesting is that the landmarks are shared by many different high schools, yet with different stories at some parts. An example of this would be the haunted tree; instead of summoning a ghost when you anger the tree, another version is that you summon a very demonic creature that resembles a chupacabra. This could possibly be a latino spin on the legend, but this demonstrates how legends change for different people. What makes this a legend is the fact that there have been sightings of Blackstar Bill by many people. However the meeting site for occultists cannot be proven. Either way high school kids perform this ritual to state that they have been there and survived. It is basically a rite of passage for these high school kids, once they can drive and get there.