“Ok, so, this is what people consider the national dish in El Salvador. It’s called pupusas. It’s a corn tortilla stuffed with different things. It could be pork, it could be cheese, it could be beans…now, people even have hot dogs as part of it! That’s something I haven’t experienced since I don’t live there anymore, but it’s happening- people are trying out new things. American pupusas even have stuff like spinach or mushrooms added to them to appeal to people who may not have tried them before.

It is pretty much everywhere. I would say that it is a very humble, simple dish. Anyone can make it and eat it. There is no right or wrong time to eat it, so you can eat for breakfast, lunch, and dinner, ot anywhere in between. In school, when I was growing up, we would have it at recess, for example. It’s also shared in the sense that you get many of them at a time and eat it all together with a group/

Something we eat alongside it is “curtido”, which is almost like a type of sauerkraut. Usually, the places where they have pupusas will have a place where you can get extra curtido, carrots, onions, all sorts of things that have been pickled in vinegar. It’s not necessarily pickled in the way things are pickled here, it’s not very sour, but it has gone through a pickling process. The repollo– cabbage- doesn’t take so long to ferment.

It’s everywhere, so you can find it in school. Around your neighborhood, there may be three or so places where you can go and buy them. They’re not that expensive. At least, when I was growing up, each pupusa was just a couple of cents. Now, it’s about 60 cents, compared to here where they’re three dollars per pupusa! But you could find them anywhere. There are restaurants in El Salvador where that is all they do. There are regions in El Salvador where you can find specific pupusas, like ones that use rice instead of corn for the dough- the masa. There are different types of stuffings such as squash, close to the coast you can find seafood, like shrimp. People sell them at street corners, local markets- it doesn’t have to be a specific place. Like here in L.A., you’ll even find them in places like the Piñata District. So things vary, and there are specific places in El Salvador that are known for the pupusas. The buses will even stop in the outskirts of those towns and someone will come with pupusas to sell on the bus. This was back when bus trips were six or so hours and people needed a meal- it was always pupusas. They’re less commonly done at home since you can buy them everywhere.” 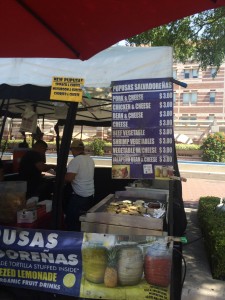 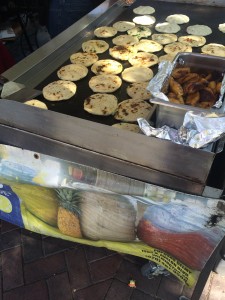 Close-up of pupusas with a popular side of plantains

My thoughts: Thinking about Appadurai and the idea of high cuisine, it’s clear that El Salvador doesn’t distinguish between high cuisine and low cuisine- the food that is the national dish is described as “humble” and “peasant food”. This ties into other Salvadoran folklore that reflects national pride because they often focus on the working class. Also, in relation to globalization, we can see how pupusas have now become popular in other areas of the world, such as Los Angeles, were they may be altered to fit the tastes of Americans. Here at USC, the pupusa stand at the Farmer’s Market have spinach and mushroom pupusas that are reminiscent of pizza, but don’t actually resemble any Salvadoran recipes.